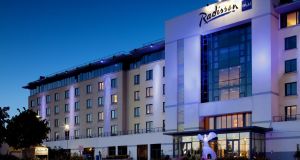 New accounts show revenues at the hotel company, CG Hotels Dublin Airport Ltd, last year increased by 3 per cent to €14.34 million from €13.96 million against the backdrop of the airport recording passenger numbers of 31.5 million for last year.

Operating profits last year at the hotel company remained flat at €2.75 million and a non-cash impairment reversal of fixed assets of €2.67 million resulted in a pre-tax profit of €5.43 million.

According to the directors’ report, “the company has forecasted a strong trading position for 2019 and intends to continue its implementation of a range of capital projects designed to enhance the property”.

At the end of last year, the company had accumulated profits of €4.1 million. The company’s cash reserves more than tripled from €1 million to €3.66 million.

The CG Hotel Group purchased two hotels at Dublin and Shannon airports along with a third former Great Southern hotel at Cork airport for about €75 million from the airport operator DAA in 2006. It sold the Shannon and Cork airport hotels were sold on for €5.42 million in 2014, but the group retained the Radisson Blu hotel Dublin.

The directors of CG Hotels include Ben Walsh, Alan McIntosh and Patrick Coyle.