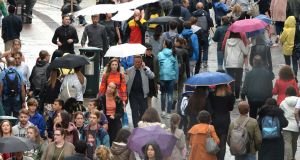 Compared with this time last year householders were more upbeat about their financial situation, according to Bank of Ireland’s Economic Pulse survey. Photograph: Cyril Byrne

Irish businesses and consumers sentiment fell in July with Brexit uncertainty unsettling companies and households a “bit more wary”, according to a survey.

Bank of Ireland’s Economic Pulse dropped to 93.6 in July, down 4.5 points on the previous month, with external tensions dampening the mood of Irish spenders.

“The drop this month comes after a run of good readings in the first half of the year and on the back of renewed Brexit uncertainty,” said Dr Loretta O’Sullivan, Bank of Ireland’s group chief economist.

“While the UK government’s White Paper on the future relationship with the EU has helped move the talks on somewhat after a period of inaction, it remains unclear whether a withdrawal agreement can be successfully concluded in line with the autumn timetable.

“This has unsettled firms in particular and, along with concerns about rising protectionism, has led them to temper their growth ambitions slightly.”

Although the overall pulse dropped, compared with this time last year households were more upbeat about their financial situation. Businesses, meanwhile, caused a significant drag with the pulse dropping 5.3 points on June’s two-year high. The industry, services and retail pulses all lost ground this month, with only the construction pulse bucking the trend. Global trade tensions were attributed with causing the drag this month.

Over a three-month period, Dublin, Connacht and Ulster were more positive regions while the rest of Leinster and Munster became less upbeat.

Bank of Ireland’s Economic Pulse is conducted in conjunction with the European Commission by Ipsos MRBI with 1,000 households and roughly 2,000 businesses surveyed.

1 ‘No demand... because there are no people’ at well-known Dublin pub
2 Stripe lures Dhivya Suryadevara from General Motors to be CFO
3 Nearly 30,000 could lose pandemic payment if they do not confirm eligibility
4 How to . . . move (almost) everything to your new phone
5 AIB concedes Covid mortgage policy was ‘regrettable’
6 Divorce: What will it cost and can you afford it?
7 Revised help-to-buy scheme opens for applications
8 Digital Hub warns of need for emergency funding from State
9 MSD buys Takeda biologics plant in Dunboyne
10 Buying a second home now that we work from home
Real news has value SUBSCRIBE