Prospect of German at top of ECB alarms bank

Jens Weidmann, opponent of current monetary policies, could be in line to succeed Draghi 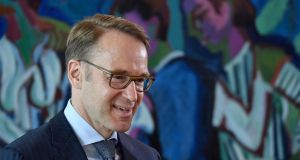 Jens Weidmann, president of the German central bank, the Bundesbank.

For years, Jens Weidmann was the unabashed hawk at the heart of the European Central Bank, the voice of German opposition to the unconventional monetary policies intended to save the euro zone from a deflationary death spiral.

Now, an uncharacteristic period of reserve from the Bundesbank president has convinced his euro zone colleagues that he is mounting a quiet campaign to take over as ECB chief. Not all of them are happy at the prospect.

Mario Draghi’s term as ECB president is up in late 2019 and speculation is rife that Berlin will push for Mr Weidmann - a close ally of Chancellor Angela Merkel - to become its first German head.

As the euro zone’s largest economy and most populous member state, Germany has a strong case for the eight-year presidency that has gone through Dutch, French and Italian hands.

But a big problem facing Berlin’s bid is that Mr Weidmann’s views on how to fight the crisis have been consistently out of sync with the majority of the ECB’s governing council. That he has expressed his criticism so publicly has rattled insiders at an institution that puts a premium on unanimous support, or at least a strong consensus, for controversial decisions.

Unlike the Bank of England, where splits within the Monetary Policy Committee are seen as a mark of the independence of its members, euro zone insiders view Mr Weidmann’s dissent as unhelpful in improving the image of monetary union in Germany.

“Jens has never defended the ECB to the German public. He’s a nice guy, but he didn’t do that. And it is the job of a governor of a national central bank to do that to show that they are moving together with the ECB,” said a senior Eurosystem official. “Jens has not proven that he can speak for all. And that’s a big weakness if you want to lead a multi-country institution.”

The ECB and Mr Draghi have faced criticism and lawsuits from Germany’s economic establishment over their decision to buy government bonds and cut interest rates to historical lows.Wolfgang Schäuble, finance minister, has accused the central bank of contributing to the rise of the Eurosceptic Alternative for Germany party.

On occasion, Mr Weidmann has stood up for the ECB. He defended its low interest rates against claims from Mr Schäuble that they robbed Germans of their savings, warning Berlin to respect the central bank’s independence.

The Bundesbank has also published research, noted by its president, showing the ECB’s policies have not widened inequalities between rich and poor. And within the euro zone’s central banking network, Mr Weidmann’s decision to approve the legality of quantitative easing, if not the need for the programme itself, was viewed as evidence of a more pragmatic streak. But he has consistently criticised radical ECB policies, saying in 2012 they gave him a “stomach ache” and resembled a “drug” for financial markets.

Those present in governing council meetings say that while he raises his objections in a politically savvy way, he has failed to come up with alternatives. Mr Draghi has made his disgruntlement over this strategy clear, publicly decrying the “No to everything” attitude to monetary stimulus. Fortunately for Mr Weidmann, the governing council consensus is shifting towards removing some central bank’s stimulus as confidence in the recovery grows. He is not expected to object to Mr Draghi’s calls for “prudence” in ending bond buying.

Mr Weidmann did not attend the ECB’s annual forum in Sintra last week, travelling instead to Berlin. Yesterday, he was back in Frankfurt, at the Bundesbank headquarters, taking questions from the public at a packed open day.

He defended the ECB’s negative interest rates, saying Germans were “not only savers, but homeowners and taxpayers”. After his talk, Helmut Best, a pensioner from the region, said his impression of Mr Weidmann was “very positive” and believed if he was the next president of the ECB “it would better serve our interests.”

German politicians from the sister party of Ms Merkel’s CDU, the CSU, have already started to campaign for a German to take the role. Hans-Peter Friedrick, a lawmaker from the party, told Bild newspaper earlier this year: “The next ECB chief must be a German, who feels bound to the Bundesbank’s tradition of monetary stability.”

By the time Mr Draghi’s term is up in November 2019, the ECB may have started to raise rates. But some euro zone policymakers fear that Mr Weidmann would not act so decisively should a future crisis leave the euro zone vulnerable to collapse.

Some would feel more comfortable if EU leaders bolstered the bloc’s banking union or added Eurobonds - mutually backed debt - to Europe’s crisis-fighting armoury before putting a German in charge of the ECB. A spokesman for the Bundesbank declined to comment.

Jens Weidmann took over the Bundesbank presidency in May 2011 after working as Angela Merkel’s top economic adviser.

Born in Solingen, West Germany, in 1968, he studied in France and Bonn, receiving his doctorate in economics in 1997. He worked at the IMF before returning to Germany in 1999 to head the Council of Economic Experts. His first stint at the Bundesbank was between 2003 and 2006 as deputy head of the economics department.

1 Irish company to test vaccines on volunteers deliberately infected with Covid-19
2 The wealth of the Irish – how do your assets match up?
3 Dunnes Stores set to enter grocery delivery market
4 KBC Ireland fined €18.3m for ‘unconscionable’ tracker scandal role
5 Should I switch bank now with Ulster Bank at risk of closing?
6 Willie Walsh joins CarTrawler as deputy chairman
7 Eir takes on extra staff as ComReg chases it on complaints
8 Will Facebook walk away from European market after data protection 'hissy fit'?
9 How to upgrade your home entertainment system for less
10 Irish Fairy Door Company moves to licensing model
Real news has value SUBSCRIBE