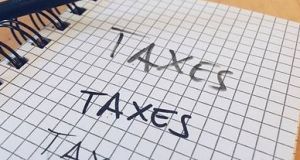 Ibec chief executive Danny McCoy said income tax cuts would be paid for by the buoyancy of the economy. Photograph: Getty Images

With most of the so-called “fiscal space” earmarked for Budget 2018 effectively crowded out by pre-existing spending commitments and a new public sector pay deal, Taoiseach Leo Varadkar has opened up the possibility of funding future tax cuts by cutting expenditure elsewhere.

Speaking at the Government’s National Economic Dialogue in Dublin Castle, he noted that while the marginal fiscal space for October’s budget amounted to €1.2 billion, the total fiscal outlay would be in the region of €50 billion, and there was no reason to think that all this money was optimally deployed.

“In the run-up to each budget a lot of emphasis is placed on the extra resources that are available – the fiscal space as we like to call it,” Mr Varadkar said.

“It is important to bear in mind, however, that this represents only a small increment of the total resources available to government.”

The focus should be on the totality of expenditure and taxation, he said, noting that gross voted expenditure would by €53 billion this year. “Are we sure that all of the existing spending programmes really represent the best use of resources?”

He said if as little as 1 per cent or 2 per cent of this expenditure could be reallocated, “we’d have an extra €560 million to €1 billion” to allocate to other areas.

“This, in many ways, is the hidden fiscal space which is much larger than the official fiscal space, and is something that we need to examine.”

The Department of Public Expenditure has been conducting a spending review, which will deliver its findings shortly.

Also addressing the forum was Tom Healy of the Nevin Economic Research Institute, who said there were areas of spending in which Ireland was out of line with its European peers.

In the health sector, he said the State spends comparatively more per capita on pharmaceuticals and drugs, and on outpatient hospital services. The latter because of the lack of investment in community care, which ends up “ backloading demand” into the hospitals.

He also noted that Ireland spent more than most countries on social supports for housing, such as rent supplement, which he blamed on a lack of investment in social housing at local authority level. Enhanced capital spending in these areas could reduce current expenditure.

Several other contributors to the dialogue called for an end to the reduced VAT rate for the hospitality sector, noting the high booking rates now enjoyed by hotels.

The foregone tax revenue from the special VAT rate was initially estimated at €350 million when it was first introduced in 2011, but this is estimated to have risen to over €600 million in the intervening period.

Ibec chief executive Danny McCoy said income tax cuts would be paid for by the buoyancy of the economy.

He said the economy was growing faster than expected, putting more people back to work, increasing the Government’s tax take and reducing its social welfare spend in what he said was a “virtuous circle”.

Mr McCoy believes the Government would not have to trim expenditure to finance income tax cuts. He said the current shortfall in tax, which is linked to a slowdown in universal social charge (USC), was probably down to self-employed construction workers and would unwind by October’s budget.

1 Belgium helps Ireland to a Brexit boon
2 Can Grafton Street stop the flood of closures?
3 ‘My rent here is so low it’s a joke’
4 ‘Sad day’ for House of Ireland as tourism retailer goes out of business
5 FC Barcelona to pursue Nike for compensation over defective shirts
6 New Powerscourt Springs hotel to open in defiance of virus gloom
7 AIB to compensate another 1,100 tracker mortgage holders
8 Will family’s tax debt stop me getting my inheritance?
9 Goodbody’s planned €155m sale to Bank of China falls through
10 This charming man: how Paschal Donohoe won the Eurogroup presidency
Real news has value SUBSCRIBE