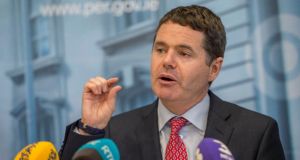 Minister for Finance Paschal Donohoe will ‘dig his heels in’ on the digital sales tax at next week’s meeting of European finance ministers, Government sources said. Photograph: Brenda Fitzsimons

The Government is under increasing pressure to agree to European Commission proposals for an EU-wide 3 per cent digital sales tax ahead of a meeting of European finance ministers in Brussels next week.

Government sources says it will resist the proposal in its current form, but there has been heavy lobbying from the commission, the French government and the Austrian presidency of the European Union to have the draft directive approved by the end of the year.

The measure would impose a 3 per cent tax on certain digital revenues, such as from online advertising, to be imposed by the state where digital transactions take place – meaning, in effect, that states with larger markets would benefit.

The Government has consistently opposed the proposal. However, Irish allies in Europe have been stepping back from opposition to the tax, under heavy pressure from the French government. One source said Ireland’s remaining allies on the issue were Sweden, Denmark and Estonia. Last year, Ireland counted on the support of many of the Nordic and eastern European countries.

Ireland had warned its EU partners that big technology firms could move their headquarters to the UK after Brexit to avoid an EU-wide tax. However, this argument was undermined this week when the British government announced in its budget the intention to introduce a UK tax on digital sales.

In addition, Irish officials in Dublin and Brussels acknowledge that while Ireland is seeking support from its EU partners on Brexit, maintaining blanket opposition to the tax proposals is becoming difficult.

Nonetheless, Government sources said Minister for Finance Paschal Donohoe would “dig his heels in” at next week’s meeting, though senior figures acknowledged that Ireland was “under the cosh” on the issue.

Dublin fears that if the tax goes ahead it would establish a precedent which would in time undermine Irish tax sovereignty and severely undercut the Irish economic model of attracting foreign direct investment.While the lost revenue would not be serious – the Revenue Commissioners estimated it could cost Ireland €160 million a year – it is the precedent that worries the Government.

Documents prepared by the commission in advance of the meeting leave little doubt about the importance that Brussels attaches to the issue. It says that the commission is determined to ensure “fair taxation” of the digital economy, with the current regime seen as “inadequate”.

In a statement, a spokeswoman for Mr Donohoe said Ireland was “engaging constructively” but continued to have difficulties with the proposal.

She said Ireland had raised several concerns about the tax, citing collection, scope and the design of a potential sunset clause to ensure it would only be temporary. Ireland also had concerns that it proposed to tax revenue rather than profit, she said.

Feargal O’Brien, head of policy at Ibec, the Irish employers’ group, said Irish business believed “that changes to the taxation of the digital economy must be co-ordinated on a multilateral basis at the OECD”. He warned that the EU proposal would be seen as a “tariff-type measure targeting US technology companies and would lead to a further deterioration in transatlantic trade and economic relations”.

If the proposal is not agreed by EU finance ministers in December, “then I think the chances of an EU-wide implementation begin to taper off significantly”, said Feargal O’Rourke, managing partner at PwC.

France and the commission are seeking to have the measure agreed before the end of the current commission’s term next year. The OECD proposals have a sounder basis, Mr O’Rourke said, but if the timetable slips, “then the clamour for an EU turnover tax will increase”.