EU tax plan ‘is a bigger threat to Ireland than Brexit’ 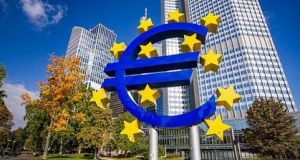 Corporation tax harmonisation plans across the euro zone pose a bigger threat to Ireland than the departure of the UK from the European Union, the head of the Irish Fiscal Advisory Council has strongly warned.

Speaking to the Oireachtas Committee on Budgetary Oversight, the chair of the council, Seamus Coffey, said Ireland could lose up to €4 billion worth of corporation tax if EU-wide tax rules for multinationals were set.

His warning came as European Commission president Jean-Claude Juncker told MEPs that tax rules for Facebook, Google, Amazon and other digital companies should no longer be subject to veto by member states.

“Europe has to be able to act quicker and more decisively,” Mr Juncker told the European Parliament in Strasbourg, saying existing EU rules should be used to reduce the power of individual EU states.

Mr Juncker’s declaration came ahead of Friday’s meeting of EU finance ministers, where the Minister for Finance Paschal Donohoe will be faced with an Estonian plan to tackle global digital giants.

Weaknesses in international tax rules have “unintentionally turned into an unequal competitive advantage for the most successful and rapidly growing businesses”, says the Estonian document.

Meanwhile, the European Commission is to produce legislation on digital taxation “in the coming weeks”, according to Pierre Muscovici, the commissioner for Economic and financial affairs, taxation and customs.

Mr Juncker’s speech in Strasbourg prompted an immediate rejection from Dublin. “The Irish Government would not favour any change to existing EU voting rights on corporation tax,” it said.

The proposals for deepening economic and monetary union within the euro zone from the commission were discussed by the Cabinet after a briefing from Minister for Foreign Affairs Simon Coveney.

Though firmly against common EU corporation tax rules, the Government is supportive of measures proposed by the commission in the period up to 2019 to complete common rules on banking and capital markets regulation.

The commission’s proposals for a significant deepening of economic union and a consequent loss of power for national governments were “sketchy” and “need more detail”, according to Ministers.

“However the general proposals set out in the second phase [post-2019] need further careful consideration and analysis to avoid any potential unintended effects. This was referenced today by Mr Juncker in his state of the union address,” said the Government.

Speaking to the Oireachtas committee, Mr Coffey said the impact of EU corporation changes on Ireland – on employment, on investment and on the State’s ability to attract future investment – were impossible to calculate at this stage.

“We seem to be in a bit of a sweet spot in relation to attracting investment, attracting employment, and the ability to raise tax revenue, particularly from US companies. [That] would no longer leave us in that sweet spot,” he said.

Ireland would be the worst hit euro zone state because the formula proposed to tax corporation profits favours EU states such as France and Germany with large home markets over smaller exporting ones like Ireland.

Asked by Fianna Fáil’s Dara Calleary which posed a bigger threat to Ireland, Brexit or EU-wide corporation tax rules, Mr Coffey said: “Let’s assume they both happen, in my view the latter would be more serious.”

However, Mr Coffey said he still rated the common consolidated corporate tax base (CCCTB) risk to Ireland as low given the level of opposition to it across Europe. Brexit was likely to happen, and therefore posed a more immediate risk.

Trade tensions still weighing on global growth, IMF warns 14:08
New measures to cut costs for businesses using 1800 numbers 13:52
Ireland has fifth-largest number of billionaires per capita in the world, says Oxfam 13:43
Who are Ireland’s 17 billionaires? 13:19
Why has the pension age question suddenly become an election issue? 12:06