The reports of sterling’s revival are greatly exaggerated 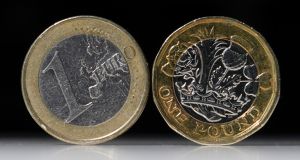 Pound for euro: sterling mini-revival may be short-lived. Photograph: AFP

Sterling’s mini revival has brought some welcome relief to Irish exporters, but with the Brexit negotiations on a knife edge and UK growth still weak, the shift may be short-lived.

The UK currency surged to a six-week high of 89p against the euro this week, spurred by a surprise jump in UK inflation to 2.9 per cent in August, which heightened speculation that the Bank of England may move to raise interest rates earlier than expected or at least signal as much when it meets later today.

If a third dissenter joins the two votes calling for a hike or governor Mark Carney makes more hawkish noises after today’s meeting, this would probably be enough to strengthen sterling further.

However, once this set-piece is over, the focus will revert to the political arena and Brexit.

UK prime minister Theresa May is scheduled to make two big speeches on Brexit in the coming weeks, culminating in an address to the Tory party conference next month. This has the potential to push sterling the other way if precedent serves as a guide.

Last year, at the same conference, her speech, which put regaining control of immigration above staying inside the EU’s single market, sent sterling plunging.

Despite Downing Street’s effort to soothe fraying business nerves, the government’s pronouncements have tended to sow deeper confusion about the UK’s Brexit policy. Upcoming European Council meetings are also likely to draw attention to the slow progress in the Brexit negotiations.

Perhaps predictions of euro-sterling parity, led by HSBC and Morgan Stanley, are too bearish, but the UK government’s fuzzy position on Brexit and the lack of meaningful progress in the Brexit talks make things impossible to predict.

While many investors believe there is value in sterling given the inherent strength of the UK economy, the Brexit phenomenon makes it more unpredictable than usual.

As a currency analyst said last week: “We are staying away from sterling for now as it remains a headline-driven currency even though on a valuation basis it looks attractive.”