Post-Covid spending ‘may not occur’ in hardest hit sectors 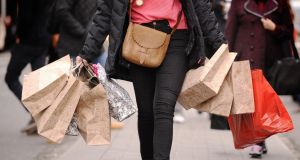 Spending did not register sustained growth on 2019 levels over the summer, despite further easing of restrictions.

The Central Bank has said there could be “significant implications” for the economy after raising concerns that consumer savings accumulated during the Covid-19 pandemic may not be spent in the hardest hit sectors when public health measures are lifted.

In an economic letter titled The Impact of Covid-19 on Consumer Spending, the regulator pointed out that incomes have been largely supported by the State since March, while spending has been curtailed due to consumers being unable to visit many retail and social outlets.

“In the absence of substantial income falls, the reduced level of spending has generated a significant increase in savings,” it said.

The letter then explored the question as to whether savings accumulated as a result of public health restrictions will be spent in areas that were closed such as restaurants and hotels.

“There is considerable uncertainty as to where and how quickly these savings will be spent, which will have significant implications for the recovery,” it warned.

It went on to say that home improvements and future holidays feature highly in households’ intentions, while building savings is the “most likely use”. A potential avenue for these savings, it argued, could be down payments on residential property mortgages.

“More than half of those with additional available money, as a result of pandemic-related restrictions, intend on saving some of that money going forward,” it said.

“Over a third of people intend to spend some of the additional money on home and garden improvements and over a quarter of people hope to use some of the money for future holidays.”

The letter continued: “We find that approximately half of the savings accumulated during the second quarter were precautionary, while the other half were forced savings – resulting from the lack of opportunity to spend coupled with the protection of incomes.

“Those most likely to have disproportionately curtailed their spending since March 2020 and to have been in a position to accumulate savings are also those with relatively low marginal propensities to consume.

“This means that the boost to consumption when the pandemic is over may be lower than would be the case if the shock had been equally distributed across households.”

The letter also pointed out that many businesses pushed back against the pandemic by expanding their online presence. For example, IE Domain Registry saw new .ie domain names increase by close to half in April and May 2020.

Furthermore, it described the impact of the pandemic on private consumption, which accounts for just over half of gross national income. It found that in the second and third quarter of 2020 it fell by 13.5 percent, compared to a year earlier.

Between the introduction of the first containment measures, on March 12th, and the middle of April, total personal card spending (ATM and point-of-sale) fell by over a third.

As the containment measures began to be eased from May, total card spending began to rebound, recovering, in year-on-year terms, to 2019 levels in late June.

However, spending did not register sustained growth on 2019 levels over the summer, despite further easing of restrictions and in part due to the reduced role for pent-up demand after the initial opening.

On average, total personal card spending was down 1.8 per cent over the July to September period, compared with a year previously.

This has remained 6.6 per cent lower, on average, in the first three weeks of November compared to the average daily spending level in 2019.

“That this fall is substantially smaller than the fall in April and May provides some evidence of adaptation over time by both consumers and retailers in learning how to shop and sell safely,” the letter noted.