State’s biggest trade surplus last year was with US

Almost €57bn of goods were imported from Europe, of which €20bn came from the UK 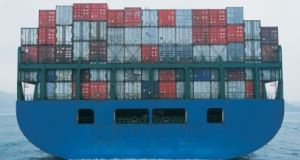 The Republic exported €47 billion of goods, almost one-third of total exports, to the US in 2019, making it our largest single export market, according to a new report from the Central Statistics Office (CSO).

Medical and pharmaceutical products and organic chemicals comprised €32 billion or 68 per cent of the total exports to the US in 2019.

CSO statistician Ciarán Counihan said the State exported a total of €152 billion of goods and imported €91 billion during the year.

“More than €57 billion of our exports went to EU countries, and a further €15 billion was exported to the UK,” he said.

We exported almost €4 billion of food and beverages to the UK in 2019 and imported €4.3 billion.

The largest trade deficit in 2019 was with France, with €5.4 billion of exports and €12.3 billion of imports recorded, giving a trading deficit of almost €7 billion. The deficit was largely due to imports of aircraft.

There were €79 billion of goods exported to Europe in 2019, and nearly half of this was to Belgium, Germany and the Netherlands combined, while the UK accounted for a further €15.7 billion.

Over €5.7 billion of machinery and transport equipment was exported to China, which represents three-quarters of the total exports of these products to Asia.

There were exports of €2.8 billion to Japan, including €1.5 billion of chemicals and related products. Hong Kong, Turkey and Saudi Arabia were the next largest export partners in 2019.

Overall the State exported €49.5 billion of medical and pharma products, which represented 32 per cent of total exports. There were €30 billion of exports of organic chemicals.

Almost €57 billion of goods were imported from Europe, of which more than €20 billion came from the UK, our largest import partner.

More than €1.2 billion of Ireland’s imports of clothing and apparel came from Asia in 2019, comprising over 60 per cent of total imports of these products.

Some €21 billion of imports of aircraft were recorded in 2019, which was 24 per cent of the total value of imports. This result was partly due to the activities of aircraft leasing companies located in the Republic.