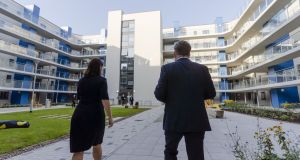 UK insurance giant Legal & General has teamed up with housing agency Clúid to invest €54 million in social housing projects in the Republic.

The deal, which will deliver about 200 social homes, marks the first large-scale investment in social housing here by a big international player and the first time an approved housing body (AHB) has secured financing on this scale from a private entity.

Deli very of the new homes financed through the agreement is expected to begin in the first quarter of next year, and most are expected to be located in the high-demand urban centres of Dublin and Cork.

Legal & General Investment Management (LGIM), one of the world’s largest investment firms with €1.4 trillion in assets, said the agreement was “aligned with its social purpose” of financing affordable housing. It has invested more than £1.5 billion (€1.6 billion) in similar schemes in the UK.

Clúid said the transaction would bring “much-needed long-term pension fund capital” to the housing sector here while aiding its “ambitious growth strategy” of delivering an additional 3,000 social homes before the end of 2022.

The announcement comes as a new study suggests the State will need to build 28,000 new homes a year for the next two decades just to keep pace with population growth, and up to 33,000 if net inward migration picks up.

The study by the Economic and Social Research Institute (ESRI) estimated the State’s annual housing need up to 2040 based on future trends in mortality, fertility and net immigration combined with expected changes in household size and an assumed rate of housing obsolescence.

The Clúid announcement also comes as Department of Housing figures show there are more than 68,000 households on local authority waiting lists for social housing.

“This loan establishes a new template for funding social housing in Ireland, ” Fiona Cormican, Clúid’s new business director, said. “ We anticipate that this innovative new financing model will encourage the development of future private financing agreements in the AHB sector.”

Steve Bolton from LGIM real assets said: “There is an urgent need to innovate in this sector and provide good quality, stable homes for the many thousands of households on the social housing waiting list in Ireland.

“Covid has further highlighted the central role of the home in people’s lives, demonstrating the need for more good quality, affordable homes. Our investment in Clúid matches our extended liabilities and delivers real economic growth and social value.”

In Budget 2021, the Government set aside €3.3 billion for the delivery of housing programmes. The build target includes the delivery of 5,250 new homes by local authorities, 2,950 by approved housing bodies and 1,300 new homes through Part V acquisitions, where developers set aside 10 per cent of their developments for social housing.

Minister for Housing Darragh O’Brien described the deal as an “exciting development”. “Today’s announcement demonstrates the innovative ways in which AHBs like Clúid are diversifying their funding models to achieve even greater value for money whilst refusing to compromise on quality,” Mr O’Brien said.

Clúid is the State’s largest social housing body with more than 8,000 properties under management.