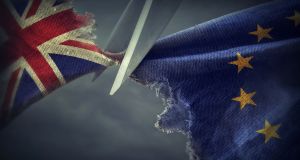 Currency fluctuations top the list of Brexit-related concerns for firms with 44 per cent of respondents citing it as their main worry.

Just over half of Irish companies have a strategy in place to deal with Brexit, according to a new survey that finds most firms remain optimistic about the future.

The survey of more than 120 Irish chief executives shows that Britain’s departure from the European Union is a concern for companies here, with 60 per cent of those firms who don’t currently have a Brexit plan drawn up intending to develop one.

The report, which was issued by Deloitte and Enterprise Ireland to coincide with the CEO Forum, which takes place in the RDS in Dublin on Wednesday shows that 96 per cent of the chief executives surveyed are planning to expand over the next 12 months.

In addition, 84 per cent said they were confident about their companies’ prospects for growth in 2017.

The survey finds that currency fluctuations top the list of Brexit-related concerns for firms, with 44 per cent of respondents citing it as their main worry. Increased costs were a worry for 23 per cent of chief executives, with attracting talent and additional bureaucracy also ranked as issues.

Three-quarters of chief executives said they believed that Brexit provides a good opportunity for more Irish companies to focus on exporting to mainland Europe.

According to the research, just 28 per cent of Irish companies are sourcing alternative funding. However, 73 per cent of business leaders said they were open to moving beyond traditional sources for finance.

1 Fianna Fáil may have just pressed the pause button on the property market
2 Who are Ireland’s 17 billionaires?
3 Are there annual limits on inheritances or gifts to a child?
4 My father in a nursing home wants to gift me his house
5 European investor acquires Harcourt Road offices for €55m
6 Pensions in the spotlight, climate clash at Davos and confusion at O’Flynn empire
7 Netflix forecasts tough start to 2020 as Disney+ goes global
8 O’Flynn company ‘mistakenly’ got go-ahead for Birmingham project
9 State subsidises public sector retirees to cover gap until State pension
10 Corporate tax change is inevitable, says Donohoe
Real news has value SUBSCRIBE