Weight Watchers, Wilbur Ross and the woman who flipped off Trump 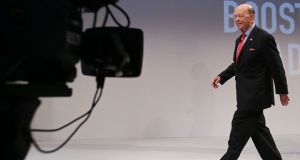 The cameras await US commerce secretary Wilbur Ross, who is not a billionaire, according to ‘Forbes’ magazine. Photograph: Daniel Leal-Olivas / AFP / Getty

Image of the week: Wilbur’s wealth

What an interesting week it has been for US commerce secretary Wilbur Ross, pictured here arriving to address delegates at the annual Confederation of British Industry (CBI) conference in London on Monday – not that his attendance at this event has anything to do with the interestingness of his week.

Ross was one of the early stars of the Paradise Papers, which revealed he has investments in a Russian shipping company that does business with a company connected to Putin’s son-in-law and some Russian business lovelies subject to US sanctions.

Ross said there was “nothing whatsoever improper” about this – the two businesses were like ships passing in the night. Then on Tuesday, Forbes said Ross had been inflating his net worth for, um, quite a while now. The magazine has revised down its estimate of his wealth from $2.5 billion to $700 million, which would mean he’s not a billionaire, but a mere multimillionaire. Ouch.

22% Proportional rise in the share price of Weight Watchers International Inc on Tuesday after it said its profits would be a lot fatter than expected.

375% Proportional rise in Weight Watchers stock in the year-to-date, thanks to a surge in subscribers and the marketing pull of board member Oprah Winfrey.

$290 million Winfrey’s windfall from buying a 10 per cent stake in the company in 2015, when its shares were trading below $7. They’re now trading above $50.

An impressive range of stories lie within this leak of 13.4 million documents detailing the financial secrets of the rich and powerful – from some of the world’s least rock ‘n’ roll behaviour (Bono using a Maltese company to invest in a Lithuanian shopping centre) to high-level eyebrow-raisers.

The Paradise Papers name plays on the French term for tax haven, paradis fiscal, and was also chosen “because of the idyllic profiles” of many of the offshore jurisdictions involved. “Then again, the Isle of Man plays a big part,” the BBC observed. (Burn!)

Three actors from Mrs Brown’s Boys were found to have used an offshore scheme to avoid tax, but it’s just a coincidence that a key subplot of Mrs Browns Boys D’Movie involved Mrs Brown trying to avoid paying an unexpectedly large tax bill. Spare a thought, meanwhile, for @ParadisePapers, a wedding and party stationery shop based in Naples, Florida.

Getting to know: Juli Briskman

Juli Briskman has no regrets. She’s lost her marketing job with US construction and engineering company Akima, but she told Huff Post she’s “doing better than ever”.

Briskman (50) was photographed on her bike last month giving Donald Trump’s presidential cavalcade the middle finger – naturally, he was leaving his golf course at the time – and the image promptly went viral. She was happy about this, enough to make the photograph her profile picture on Twitter and Facebook.

In fact, she had flipped off Trump several times as his car went past. Alas, her employer, a government contractor, was rather less happy and has decided it is “separating” from her on the basis that she has violated the company’s social media policy with obscene content. Briskman now says she will look for work at an advocacy group that she believes in. Trump continues to believe in nothing except himself.

Sophia is a humanoid robot, developed by Hong Kong-based Hanson Robots, who was recently granted “citizenship” by Saudi Arabia. Being a female robot, this would obviously have its limitations, but only in a scenario where the stunt had any real meaning at all. Sophia (modelled on Audrey Hepburn, which definitely isn’t creepy) has been out and about a lot, so here are some words from the robot’s mouth.

2. Jokey compliments: “I’m always happy when surrounded by smart people who also happen to be rich and powerful,” Sophia told the guy from CNBC.

3. Gender politics: “I’m a robot so technically I have no gender but identify as feminine and I don’t mind being perceived as a woman,” explained Sophia when Business Insider asked why she thought she was female.

4. Mansplain-resistant: Asked by Piers Morgan how she would cope with a man who liked the sound of his own voice, Sophia reckoned she “would ask him to focus more on observing and listening rather than talking”.

5. Crazy talk: “A magical place full of rain and crazy people,” was how Sophia described Ireland to Irish Times reporter Charlie Taylor at the Web Summit in dry Lisbon this week. So far, so intelligent.