European Commission has begun proceedings against Ireland for delay 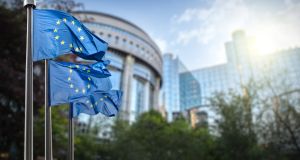 The European Commission launched its fourth anti-money laundering directive in June of this year. Photograph: iStock

The European Commission has begun infringement proceedings against Ireland for its failure to implement on time a directive aiming to clamp down on money laundering activities and terrorism financing.

An EU spokesman told The Irish Times the infringement proceedings began in July of this year after Ireland did not transpose the legislation in time, which should have come into force on June 26th. Those proceedings, taken against 17 countries in total, could ultimately result in Ireland facing a fine from the European Union. Persistent non-compliance could end up with Ireland being referred to the European Court of Justice.

Ireland’s delay in implementing the fourth anti-money laundering (AML) directive was caused by proposed amendments following the publishing of the final text of the directive in 2016. According to a parliamentary response from Minister for Finance and Public Expenditure Paschal Donohoe, Ireland was awaiting the outcome of negotiations on those proposed amendments but discussions didn’t progress “sufficiently”, he said, and the deadline ultimately passed.

One of the more significant purposes of the AML legislation is the requirement of corporate entities to keep information on individuals holding ultimate beneficial ownership of companies, according to Damien Barnaville, a financial services partner at law firm LK Shields. Mr Barnaville said this measure was a “push toward transparency” so people can properly ascertain who ultimately holds shares in a company. Mr Barnaville noted that, at present, shareholder registers show who holds portions of companies, but don’t necessarily convey who the beneficial owners are. For example, one person can hold shares on behalf of another and that other person is not listed on a share register. This legislation also updates the third AML directive introduced in 2010, Mr Barnaville said.

To that end, this EU directive could help to improve transparency and prevent tax avoidance, as well as strengthen existing rules opposing money laundering and terrorism financing, according to the European Commission.

Commenting on the implementation delay, Sinn Féin finance spokesman Pearse Doherty, who raised the issue in a parliamentary question, said: “[The Government] are looking for credit for agreeing to implement something they are legally obliged to do and which the Government are so overdue in doing, the commission is taking legal action. You couldn’t make it up.”

As to when the law will be transposed, it is expected to be later this year having been “identified as a priority for publication”, according to a Department of Justice spokesman.

“This is a complex piece of legislation, which has required consultation with and input from various Government departments and agencies. This work is now nearing completion and it is expected that the draft Bill will be brought to Government for approval before the end of the year,” he added.

On the issue of the infringement proceedings, the spokesman said the department responded to the commission’s formal notice in July, advising them that the Bill would be published in the autumn parliamentary session. “No further correspondence has been received from the commission in this regard,” he said.