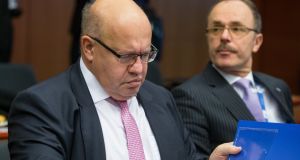 The days in paradise may be numbered for those seeking refuge from heavy tax burdens in remote islands. Finance ministers representing the world’s largest market vowed to take action following the leak of records exposing prominent members of the global business A-list.

“We will examine the new documents and will discuss the consequences this has for upcoming EU legislation,” acting German Finance Minister Peter Altmaier said ahead of a meeting with his euro-area counterparts on Monday. “We will take a very close look at this,” he said, referring to the so-called Paradise Papers reports by the International Consortium of Investigative Journalists and partner news outlets.

The new set of data taken from an offshore law firm again exposed the hidden wealth of individuals and shows how corporations, hedge funds and investors may have skirted taxes. A year after the Panama Papers, this new massive leak of confidential information from the Bermuda law firm Appleby Group Services Ltd. has shone another light on the use of offshore accounts.

Apple, which has clashed with the European Commission over taxes, was ensnared in the leak. The BBC reported that the iPhone maker moved its unit holding most of its large untaxed offshore cash reserve to the Channel Island of Jersey after a 2013 “crackdown on its controversial Irish tax practices.”

The Paradise Papers put “renewed emphasis on the work which the European Commission is doing to fight tax avoidance,” Valdis Dombrovskis, vice-president of the bloc’s executive arm, told reporters in Brussels. The bloc’s anti-trust chief, Margrethe Vestager, agreed, saying in a tweet that the leaks enable “the work against tax avoidance, for transparency.”

The EU has been working on finalising a so-called blacklist of uncooperative tax jurisdictions by the end of the year. This list of tax havens will be discussed at a meeting of EU finance ministers on Tuesday. While the discussion was originally planned for the ministers’ December meeting, the matter was put on the agenda following the Paradise Papers revelations.

“A black list is always a difficult exercise,” Luxembourg’s Finance Minister Pierre Gramegna said on his way into the meeting on Tuesday. “It’s an EU initiative that we have to agree together and we stand behind this idea.”

A common EU list will set out all the jurisdictions the bloc’s countries essentially deem to be tax havens. The bloc hopes the list will work primarily through a reputational incentive, forcing countries to become cooperative in order to avoid being “named and shamed.” However, if the countries remain persistently uncooperative, the EU hopes to have some credible sanctions too.

The bloc has stepped up its efforts in recent years to tackle tax avoidance and evasion by multinational companies and wealthy individuals. While politically contentious, the blacklist has received fresh impetus following successive revelations which shed light on such practices and drew the public’s outrage.

“If one tax oasis closes, another one opens,” said Austrian Finance Minister Hans Joerg Schelling. “We should toughen measures and those who don’t participate in OECD rules -- be it on information exchange or other measures” should automatically be put on a blacklist so that everyone becomes willing to close these tax loopholes, he said.