Commission raises forecast for euro economy, is upbeat on Republic 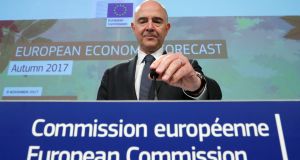 The EU Commission predicts 2.2 per cent economic growth in the euro area this year, up 0.5 per cent on its earlier prediction.

That places Irish growth close to the top of the EU league with only Malta (5.6 per cent) and Romania (5.7 per cent) growing faster this year.

The commission does, however, warn of the distorting effects of multinational companies’ activities on Irish growth figures. “The activities of multinational enterprises continue to distort headline figures and complicate macroeconomic forecasts. The Government deficit is moving closer to balance but risks to the fiscal outlook remain.”

The uncertainty arising from the Brexit process makes trade predictions very tentative, the report says. Exports are projected to increase in line with global trade while imports are predicted to gather momentum on the back of strong consumer demand, leading to a moderation of the positive impact of net exports on GDP growth.

The general government deficit is projected to fall to 0.4 per cent of GDP in 2017, an improvement of 0.4 percentage points net of one-offs compared with the previous year’s deficit and reflecting the sustained pace of economic growth.

The report says that Ireland’s Budget 2018, which includes spending measures of around 0.4 per cent of GDP that are partly covered by revenue increases of 0.3 per cent, will still see the deficit fall to 0.2 per cent of GDP in 2018.

The commissioner for economic and financial affairs, Pierre Moscovici, said at the report’s launch that: “After five years of moderate recovery, European growth has now accelerated. We see good news on many fronts, with more jobs being created, rising investment and strengthening public finances.”

1 The wealth of the Irish – how do your assets match up?
2 Irish company to test vaccines on volunteers deliberately infected with Covid-19
3 Dunnes Stores set to enter grocery delivery market
4 KBC Ireland fined €18.3m for ‘unconscionable’ tracker scandal role
5 Should I switch bank now with Ulster Bank at risk of closing?
6 Will Facebook walk away from European market after data protection 'hissy fit'?
7 Irish Fairy Door Company moves to licensing model
8 How to upgrade your home entertainment system for less
9 Dublin and Cork airports look at setting up pre-flight Covid testing centres
10 Eir takes on extra staff as ComReg chases it on complaints
Real news has value SUBSCRIBE