Brexit fallout, the Bregretters and the happy Brexiteers with no bregrets 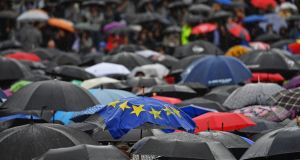 Protesters gather to demostrate against the EU referendum result in Trafalgar Square on Tuesday in London, England. Up to 50,000 people were expected before the event was cancelled due to safety concerns. Photograph: Jeff J Mitchell/Getty Images 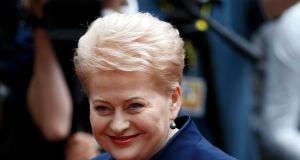 Image of the week

It would be wrong to say that the fierce declarations of love by the British public this week for the European Union were reminiscent of the behaviour of someone who dumps their partner and then resorts to desperate grand gestures in an attempt to get them back.

No, instead what’s happened is that the people stocking up on blue and yellow face paint this week have had a divorce proceedings initiated on their behalf by 52 per cent of their friends, and there is nothing much they can do about it except write “f**k you Farage” and “f**k you Boris” on placards. The Wednesday night demonstration in central London was actually cancelled on safety concerns but a few hundred did show up with their umbrellas to vent against the referendum result in the rain.

It started on the morning of the referendum result when the BBC’s Victoria Derbyshire interviewed a Leave voter who said he was “a bit shocked, to be honest” as he didn’t think his vote “was going to matter too much”. Another student told ITV News she was “very disappointed” with her decision to vote Leave. “Obviously the facts are coming in now,” she said. One “Bregretter” even wrote a thinkpiece for the Independent in which she plaintively concluded,

“What have we done? If I could take my vote back now, I would. I’m ashamed of myself, and I want my country back.” Oops. Meanwhile, at a Brussels press conference, David Cameron said he had no regrets about deciding to hold an in-out referendum, he only regretted the result. His lack of regret is indeed just one more thing for the rest of us to regret.

Getting to know: Dalia Grybauskaite

In February, the Lithuanian president tweeted “drama over” after EU leaders reached a deal with the UK that it was hoped David Cameron would be able to sell to the electorate. Alas, the drama is now only beginning. Grybauskaite, a former European Commissioner, described the Brexit vote as “sad” and “a protest vote against Britain’s political elite”.

Known in some quarters as the “Iron Lady” of the Baltics, Grybauskaite has a black belt in karate, which, the way things are going in international politics, seems increasingly likely to come in handy. She is an outspoken critic of Vladimir Putin, whose black belt is in judo, and counts among her accolades a “Woman of the Year” award from the US edition of the glossy magazine Glamour.

Not everyone regrets or “bregrets” the decision of the majority of the UK electorate (those who bothered to vote, that is) to say au revoir, ciao and toodlepip old boy to the European Union. Here are five of the people who are very happy indeed, and don’t look like they’re about to vomit like Boris Johnson.

Described the result as “wonderful” and said the UK leaving the EU was “a bit like a prison break”.

Unlike Nigel Farage, this UKIP member is actually an MP – the party’s only MP, for the moment. In January, he wrote on his website that “2016 could be the biggest year in British politics in four decades”, which has turned out to be 100 per cent correct.

The pro-Brexit Conservative MEP is only too delighted to be made redundant.

The star of trashy E! drama The Royals – in which she is often heard to say “I’m the Queen of England” (note: not the UK) – tweeted a champagne bottle emoji to celebrate.