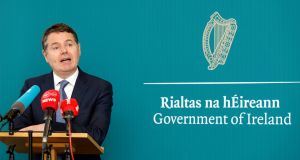 The European People’s Party, the political grouping that includes Fine Gael, the party of German chancellor Angela Merkel and right-leaning parties across the bloc, has given its “full support” to Minister for Finance Paschal Donohoe’s bid to become the next president of the Eurogroup, the powerful group of finance ministers.

“The EPP backs Paschal Donohoe for president of the Eurogroup. He will strive for a strong and inclusive European recovery,” the EPP statement read, adding that he would act as a “bridge builder”.

The EPP said that Mr Donohoe “deeply understands the challenges and concerns different countries are facing”, by virtue of Ireland having come through a bailout programme before transforming its economy to become a net contributor to the EU budget.

The president of the Eurogroup is selected from among the finance ministers of the countries that use the euro. The person chairs meetings of the 19 finance ministers when they meet, sets the agenda for their discussions and represents the group publicly.

Though informal, the group is highly influential and holding the presidency would put Ireland at the centre of debates over how to shape the future of the EU.

Major challenges include forging consensus between countries that are split over a planned recovery fund to counteract the economic damage of the pandemic, and in hammering out agreement on the next joint EU budget. Both issues are set to be the subject of intense negotiations over the coming weeks.

Mr Donohoe’s rivals for the role are Luxembourg’s Pierre Gramenga, and Nadia Calviño, finance minister in Spain’s socialist-led coalition government, who is supported by a bloc of countries in the Mediterranean.

Voting takes place on July 9th and the contest is decided by a simple majority, with each of the 19 finance ministers casting one vote. The position is held for 2½ years.

7 Dior to open boutique in Brown Thomas later this year