Paschal Donohoe should tax property and water properly in the budget 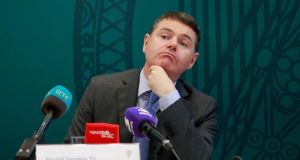 Minister for Finance Paschal Donohoe has much less room for manoeuvre in the budget than predecessors had. Photograph: Nick Bradshaw

If any Minister for Finance truly wanted to abolish the boom-and-bust nature of the business cycle, a good first step would be the abolition of the annual budget.

The circus that surrounds the setting of tax rates and spending plans is set up to give the economy a boost when it least needs it and a good kicking when it is on its knees.

That’s the history of fiscal policy, both here and in many other countries. A whole industry of vested interests exists to give unsolicited policy advice on an annual cycle focused on the budget. Yes, this column is no exception.

It’s sometimes called the political business cycle for good reason. The temptation to juice the economy in the run-up to an election is often too great, whether or not it is needed. And even well-intentioned budget ministers still get it wrong: taming the ups and downs of the economy via timely tweaks to taxes and spending has proven to be very difficult to get right in practice.

Conventional wisdom among economists now has it that whatever budgetary policy is for, it shouldn’t be about smoothing the business cycle. That’s the job of the Central Bank. Via the setting of interest rates and regulation of the banks, the real economic power now lies with unelected officials.

One of the great curiosities about economic policy is the way in which enormous power was given over to central bankers without any real popular or even political debate.

Perhaps it’s because tax rates are visceral whereas mortgage rates are merely a pain. Just imagine the outcry if decisions over health and education spending and personal tax rates were to be handed over to central bankers.

Giving them control over monetary policy was just as big a transfer of power. Maybe it was just so obvious that political control over interest rates had been such a bad idea in so many countries; handing over responsibility to technocrats was simply the only obvious thing to do.

Mostly, central bankers have discharged their new responsibilities well. They have done such a good job (with one or two exceptions) that there is surely now a case for handing over fiscal policy to similar technocrats.

In a small way, central bankers do get involved in fiscal policy: they have become part of that annual circus. Just as Opposition parties, trade unions, employers’ organisations, stockbrokers, Social Justice Ireland and newspaper columnists opine on the budget, so do central bankers. It’s an open question as to whose voice carries the most weight.

But all those voices mean that enormous effort – time and money – is spent lobbying each year. Sometimes, it has to be said, with great effect, particularly in budgets years ago when ministers for finance had much more room for manoeuvre than they do today.

Hemmed in by bond markets and Brussels, the scope for doing very much today is severely constrained. Fiscal changes are marginal rather than wholesale: the bang for your lobbying buck is nowhere near what it used to be.

Things like big VAT tax breaks for tourism are mostly a relic of the past. We won’t see many of their likes again.

Budgets are an invitation to change something, an open goal for anyone exercising power. Give somebody control and they will do things simply because they can.

If the suggestion to remove political fingers of control from the fiscal levers of power is somewhat impractical, if not naive, the case for serious reform is, I think, inarguable. So here is this columnist’s unsolicited budget submission.

Abolish the annual budget. Upscale the role and resources of the Irish Fiscal Advisory Council (IFAC). Unless that council advises otherwise, Irish public-sector salary scales should, over time, be set at European Union averages. Figure out how to deal with a health budget that will always overrun by €500 million or more a year no matter what original target is put in place.

Spend more on education: no amount is too much. A relentless focus on national infrastructure improvement is obvious to everyone. Tax property properly. Ditto water (really). Treat at least 50 per cent of corporate tax revenues as temporary windfalls.

Leave all tax rates and allowances the same – the progressive nature of the tax system is a pain for those who have to pay but results in a better-balanced society than many of those pre-budget submissions would have us believe.

Fundamental change to the tax system should happen only after a properly informed national debate about tax: demolish all of the many tax myths and debate how much redistribution is desirable and affordable.

Only simplifications of the tax system and IFAC-endorsed removals of obvious distortions should be allowed in the short term.

Perhaps the best advice to any Minister for Finance is: don’t do something, just sit there.

1 Columbia Sportswear defies gloom with first Irish standalone shop
2 Nine more suing INM and Leslie Buckley over alleged data hacking
3 How to further divide the economy using the wage subsidy
4 Restaurants file court actions against insurers over lockdown losses
5 Stocktake: Playing poker with the day traders
6 How much do Irish people earn? And what will Covid-19 do to our wages?
7 Could your old car be giving away all your secrets to its new owner?
8 Help! Will I get a State pension?
9 Citi Europe head sees Irish economy among fastest to bounce back
10 Ireland faces 'deep downturn' this year and may not rebound until 2024 if there is a second wave
Real news has value SUBSCRIBE