Noonan still cheesy about those Greeks 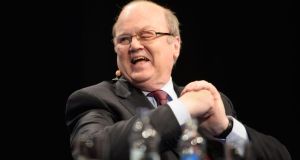 Did Michael Noonan get beaten up by a Greek when he was younger? Perhaps it is just our wily Minister for Finance’s facetious way, but he seems to revel in taking the, er, Michael out of our beleaguered Hellenic friends.

In 2012, as Greece was on the verge of collapse and desperate for some moral support, Noonan quipped that Ireland’s only economic link with Greece was Feta cheese. He delighted himself with that one. The Greeks less so.

Noonan was guest speaker at the Institute of Taxation’s dinner in the Doubletree Hotel in Dublin last Friday. He explained that it is “an accident of alphabet” that he usually finds himself sitting next to the Greek delegation at European Union meetings. It is the Hellenic Republic of Greece, you see, with the H immediately preceding the first letter of Ireland.

He recalled a recent meeting when the Greeks were seeking a fiscal lifeline: “They have an interesting way of negotiating . . . We spent about seven hours there about 10 days [previously] when there were several calls made to Athens . . . When we had everything agreed, the last phone call to Athens upscuttled the whole lot . . . I had one of those lucid moments when I saw what happened.”

Reflecting on the wisdom of negotiators having instantaneous recourse to their masters back at base, Noonan reckoned that “if Michael Collins had a mobile phone, we would still be under the British”.

Noonan also told the dinner he would reduce the tax differential between the self-employed and PAYE workers in the next budget, and even further in the following budget if re-elected. This went down particularly well with his audience, as many accounting firm partners are actually self-employed.

Meanwhile, Noonan’s boss, the Taoiseach, was interviewed by CNBC this week on the margins of Ibec’s annual conference in Dublin. Enda Kenny said the Greeks could learn some lessons from Ireland. We are the best boys and girls in the class, after all.

“Difficult though it has been for our country, the benefits [of slavish implementation of European debt diktats?] are starting to be seen after a four-year period,” he said.

“I’ve said that to the Greek prime minister myself: here’s a lesson from one small country that you can take some reflection on in terms of building your own economy for the future.”

And here’s another lesson: know the difference between your friends and foes.