Kelly revs up his ego over jobs 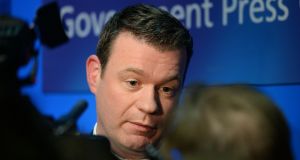 There is a new economic bubble forming, and it appears to be morphing into Alan Kelly’s head.

The Minister for the Environment, who could teach Italians a thing or two about braggadocio, released an especially vainglorious email on Wednesday after First Data announced 300 new jobs for Nenagh, in his electoral heartland.

You see, it was Alan wot won it.

“I have spent 12 months working on bringing today’s monumental announcement to fruition . . . Since I began communications with First Data . . . I have met with the company over a dozen times . . . At a personal level I am honoured to have played this key role for my county . . . It shows the importance of having representation at the top table in Government . . .”

The announcement is “the most significant day for Nenagh for 30 years”, said Kelly, who also mused that a similar-scale announcement, if it was Limerick, would be for 4,000 jobs: “That’s how significant this is for the town.”

The Minister’s old pal/foe, Minister for Finance Michael Noonan, with whom Kelly sparred over rent control, hasn’t delivered 4,000 jobs for Limerick, now, has he? So there.

The jobs are undoubtedly hugely welcome in Nenagh and Kelly clearly played an important role. Interestingly, First Data is a client of Teneo, the consultancy founded by Kelly’s brother, Declan.

Meanwhile, the 2011 census shows Nenagh’s population of 8,439 is a wee bit less than seven times smaller than that Limerick.

But let’s not argue about a wee doubling of the numbers when there is an election to be won.

Mind you, Kelly would want to brush up on his maths if he ever fancies himself, which he surely does, as a future finance minister.

1 Bank leaked my loan request to family who tried to rip me off
2 Siblings who became ill next to wind farm settle case
3 Eason acquires rival Dubray Books for undisclosed sum
4 Solar panels: Are they worth the investment?
5 Average weekly wage rose to €783 in final quarter of 2019
6 Can I see my father’s previous wills?
7 Fuel company loses €1.3m challenge over tax bill
8 Are high-flying stock markets about to ‘feel the Bern’?
9 What is at stake for Ireland in the new Brexit talks?
10 Ministerial decision key for proposed Cork retail village
Real news has value SUBSCRIBE