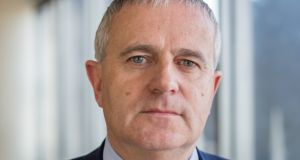 Siptu general secretary Joe Cunningham: ‘The cost of borrowing is so low that it almost pays you to borrow in the current environment’

The Government should be prepared to borrow for productive investments in areas such as health, housing and education to boost the economy in a post-Covid environment, the head of the country’s largest trade union has said.

Siptu general secretary Joe Cunningham said the country will face challenges in a number of areas in the years ahead, not just as a result of the impact of the pandemic, but also from Brexit, climate change and automation and artificial intelligence.

The union movement has proposed a 2 per cent budget deficit to fund an investment approach.

“We look at a situation over the coming years where we have the post-pandemic period and Brexit. Even with a deal there are going to be issues that could have fallout for lots of our employers, particularly in the food sector. It is a lot better there is a deal, but at the same time Brexit will present challenges.

“Climate change will also present an enormous challenge. Another area that people do not often talk about but which is going to be of huge concern to workers in the future is automation and artificial intelligence.

Mr Cunningham noted that the Irish Fiscal Advisory Council had projected that from 2030 to 2050 the country could see a growth rate of 1 per cent. He says if this were to happen, “we would be in serious trouble”.

“Nobody is talking about borrowing excessively for day-to-day spending. If you look at it, the cost of borrowing is so low that it almost pays you to borrow in the current environment. If we have that space, we should be borrowing – even if we have to warehouse some of what we are borrowing so that we can have a balanced approach to the productive investment over time. Let us have that debate.”

Mr Cunningham became general secretary nearly a year ago, following the retirement of long-time union leaders Jack O’Connor and Joe O’Flynn, but was barely in the post when the Covid pandemic struck.

From Galway city, he progressed through the union’s ranks , serving previously as regional secretary for the West and the Border counties.

Mr Cunningham backs a strengthening of social dialogue between the Government, unions, employers and other civic society groups.

He notes that the programme for government indicates a move to talks on issues affecting particular sectors involving independent experts and stakeholders, which could potentially be chaired by line Ministers. The idea is that these groups would bring forward ideas and proposals in the context of drawing up a new national economic plan.

He suggests childcare could be one such area to be examined as part of this process.

“We have a model that is extremely expensive for families, yet the people who work in it are very badly paid and as a result the turnover of staff is huge. These are people who have their qualifications and are being paid low rates of pay compared with other counties in Europe. We are saying things like that have to be part of the discussion.”

Mr Cunningham says the deal marks a move towards pay progression for workers after years of austerity, while its structure means it is weighted toward lower earners.

9 Brother is dragging his heels as executor of uncle’s will - is there anything I can do?

10 Revenues almost doubled at Voxpro ahead of €150m sale