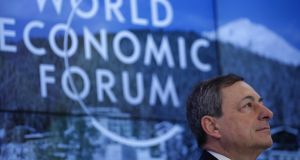 Mario Draghi, president of the European Central Bank (ECB), during a panel session at the World Economic Forum in Davos, Switzerland on Friday. Photograph: Matthew Lloyd/Bloomberg

The number of migrants entering Europe must be reduced, Dutch finance minister Jeroen Dijsselbloem has said.

His comments come as European Central Bank chief Mario Draghi said that European society would be changed by the migrant crisis.

Speaking in Davos this morning, the ECB president said that euro zone governments would have to increase spending to tackle the migrant crisis.

“Our society will be changed by this. In which direction, we can only guess. It is also premature to know how long it will take to transform this challenge into an opportunity,” he said.

The migrant crisis has emerged as a central theme at the World Economic Forum in Davos, as Europe struggles to forge a cohesive response to the unprecedented migration wave.

Around one million people reached Europe last year seeking asylum, a number that is expected to rise this year.

Speaking this morning, the Dutch finance minister and euro group chairman Jeroen Dijsselbloem said that the number of migrants in Europe needed to be reduced.

“We need to get it under control, we need to get the numbers down… the numbers that we are taking in in Europe cannot go on. It’s becoming disruptive - at local level we cannot manage it,” he told Bloomberg news.

His comments were echoed this morning by French prime minister, Manuel Valls, who told the BBC that Europe could not take in all the migrants fleeing wars in Iraq and Syria.

Europe needed to take urgent action to control its external borders, “otherwise our societies will be totally destabilised”.

Countries across the European Union have been reintroducing border checks in a bid to control the flow of migrants entering their territory, increasing pressure on the EU’s prized passport-free Schengen zone which allows for the free movement of people and trade.

Earlier this week Austria announced it would cap asylum applications, in the latest move to tackle the crisis.

Speaking at a plenary debate on the EU this morning French economy minister Emmanuel Macron said that the EU had to deliver solutions “within weeks”, including measures on border control and cooperation with Turkey.

EU High Representative Federica Mogherini said that EU decisions had to be implemented by member states as she warned against retreating to national solutions.

“National countries ask for a European response and then prevent European responses from taking place,” she said, warning that the economic consequences of dismantling the Schengen free-travel system would be enormous.

He said he supported Germany’s policy of screening migrants.

“It’s right not just that people are screened, but it’s also right that those who don’t qualify for refugee status shouldn’t stay.

“It’s absolutely vital to the integrity of the system that the distinction between a refugee, which is someone fleeing persecution, and someone on the other hand who is simply an economic immigrant, needs to be maintained.”

1 Irish companies restrict travel over coronavirus fears
2 Suspicions rife as key Brexit trade talks begin in Brussels
3 Life as a Facebook moderator: ‘People are awful. This is what my job has taught me’
4 Bogus notion that supply will cure our housing woes
5 Coronavirus rocks financial world as hopes for containment fade
6 ‘The only time apartments were viable was in . . . Ballsbridge, Killiney and Dalkey’
7 How well paid do you think you are? Here’s how to work it out
8 Coronavirus: Iseq down 11% in five days as global sell-off is worst week since 2008 crisis
9 Bank leaked my loan request to family who tried to rip me off
10 The Cork butcher’s daughter directing A-list celebrities in Miami
Real news has value SUBSCRIBE