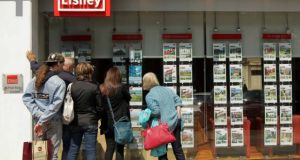 House prices were growing at an annual rate of 1 per cent before the coronavirus hit, according to the Central Statistics Office (CSO).

The agency’s latest monthly barometer for March reveals little or no impact from the pandemic.

In Dublin, prices were also in positive territory, rising by 0.6 per cent year on year.

However, this is expected to change significantly in the coming months with consumers, banks and developers effectively on pause as a result of virus-containment measures.

Belgian bank KBC said today it expected to see house prices in the Republic falling by 12 per cent this year, which would mark the first annual decline in values since 2012.

The CSO’s latest Residential Property Price Index shows the typical cost or median price paid for a home in the Republic was €260,000 while the median price of a home in Dublin was €370,000. Within the Dublin region, Dún Laoghaire-Rathdown had the highest median price (€525,000), while south Dublin had the lowest (€346,500).

Transaction data indicated 3,598 household dwelling purchases were filed with Revenue in March, which represented a 12.6 per cent on March last year.

The total value of transactions filed in March was just over €1 billion.

“The latest property price index for March is relatively flat, and contrary to commentary around drop in house prices during April, market feedback is telling us that big drops are not happening,”Trevor Grant, chair of the Association of Irish Mortgage Advisors, said.

“ Prior to Covid-19, there was a significant shortage of homes in Ireland. This has not changed, and once people begin to return to work, this demand is likely to re-emerge. So, we are currently not seeing very much downward pressure on house prices,” he said.

“There may be some downward movement in prices over the coming months, but current observations and market-based evidence lead us to believe that this will probably only be in single digits,” he said.

“ There is built up demand and it is still cheaper to buy than rent for most. It is also worth noting that we have been surprised with the relatively strong volumes of mortgage enquiries during April,” Mr Grant said.

1 ‘Sad day’ for House of Ireland as tourism retailer goes out of business
2 Donohoe’s new role, House of Ireland shuts, and being indispensable at work
3 ‘My rent here is so low it’s a joke’
4 Paschal Donohoe’s election as Eurogroup president ‘a great win for Ireland’, says Taoiseach
5 Caveat: The tourism sector deserves to be taken more seriously in this crisis
6 Donohoe’s new role puts State at centre of debate over EU’s future
7 The €1 billion market: retailers who serve tourists face double trouble in a pandemic
8 Remote working: How to get ahead in a changed world
9 Gardaí raid Irish office of failed German payments group Wirecard
10 Dalata agrees new debt facility as it recovers from Covid-19
Real news has value SUBSCRIBE