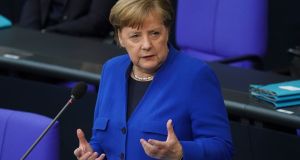 Six weeks before Germany takes over the rotating presidency of the European Council, Dr Merkel linked the standoff on so-called coronabonds with last week’s controversial German court ruling on ECB bond-buying during the euro crisis.

On Wednesday the German judge behind that ruling warned the ECB not to play “master of the universe”, and warned Brussels that taking legal action against his court could “weaken or endanger the European Union”.

Dr Merkel told MPs during questions in the Bundestag that, with an eye on the bond-buying rows, the time had come to “act cleverly so that the euro can, should and will continue to exist”.

"This will have to encourage us to do more in the area of economic policy, to more to drive on integration,” said Dr Merkel. Citing former EU commission president Jacques Delors, she suggested the EU had finally reached its limits with a single currency offering economic union without full political union.

“We have come a long way but not far enough,” she said, adding that “it was not on to say that treaty change is off the table”.

Treaty change, for instance to allow greater EU oversight of member state budgets, requires backing of national parliaments and could take years. But the German leader has indicated that this may be her long-term demand in exchange for greater EU emergency Covid-19 measures in the short term.

Italy, France, Ireland and other member states back proposals to pool their borrowing and sovereign credit ratings in a common bond, driving down lending costs for crisis-related spending.

Northern European countries, led by the Netherlands and Germany, say such a measure is politically impossible without greater EU oversight of finances of other euro states.

The German leader said talks were already under way on this point as part of a wider discussion of the upcoming EU multi-annual budget, meaning the German presidency will steer such discussions in the second half of the year.

Berlin finds itself at the heart of a second row over sovereign bond-buying. A week ago Germany’s constitutional court in Karlsruhe ruled the ECB had not done enough to justify its bond-buying programme to stabilise the euro, and that this was a partial breach of German constitutional law.

That ruling triggered frantic telephone diplomacy between Berlin, Brussels and Frankfurt on how to meet Karlsruhe demands for further clarification without impinging on ECB independence.

On Wednesday, Judge Peter Huber, the man who drafted the ruling, dismissed European Commission claims that the Court of Justice of the European Union (CJEU) in Luxembourg had the “final word” on EU law.

The Karlsruhe court ruling attacked CJEU backing of bond-buying, and Prof Huber said in two daily newspaper interviews that a 60-year-old legal imbalance in the bloc had allowed the CJEU to push the idea of the “absolute priority” of EU over national law.

“The EU is not a federal state that, through its own strength, can endow an autonomous legal system, unconditionally, on member states,” he told the Süddeutsche Zeitung. “Its basis are international treaties that member states can only ratify within the context of their respective constitutional law guidelines.”

He said his court was not alone in the EU with this view. Halting this discussion with legal action, a so-called “infringement procedure” already threatened by Brussels, would, Prof Huber warned, “cause a considerable escalation which could plunge Germany and other member states into a constitutional conflict that is difficult to resolve”.

Prof Huber said the EU’s mixture of national and transnational law was a “dialectical process in which everyone takes the other seriously, engages with the other’s arguments, is prepared to learn and to correct themselves”.

He said the CJEU “seems to have rather hierarchical ideas”, a week after he attacked the court’s bond-buying ruling as “incomprehensible”.

As for the ECB, over which Germany’s constitutional court has no judicial oversight, Prof Huber demanded it “take responsibility in the eyes of the public” to explain how it respects its inflation-fighting mandate.

1 Brexit: System agreed for Irish goods to skip checks on UK trade
2 Why are markets booming when a crash is on the way?
3 David McCullagh announced as co-host of RTÉ Six One News
4 Vodafone to speed up 5G rollout using new technology
5 Power, legitimacy, urgency make potent shareholders
6 Stocktake: Playing poker with the day traders
7 Providence shares rise as Barryroe expert joins board
8 Ireland faces 'deep downturn' this year and may not rebound until 2024 if there is a second wave
9 ‘I sometimes wonder if New Yorkers know how to relax’
10 Why UK supermarkets are not making super profits
Real news has value SUBSCRIBE