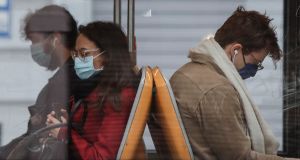 People wearing face masks to prevent the spread of Covid-19 on a bus in Milan on Wednesday. The IMF said borrowing costs were crucial for advanced economies. Photograph: AP

Most advanced economies that can borrow freely will not need to plan for austerity to restore the health of their public finances after the coronavirus pandemic, the IMF has said in a reversal of its advice a decade ago.

Countries that have the choice to keep borrowing are likely to be able to stabilise their public debt by the middle of the decade without having to raise taxes or cut public spending plans, Vitor Gaspar, head of fiscal policy at the fund, told the Financial Times.

However, countries that have only limited access to financial markets will need to be much more careful about their fiscal strategies, he warned in an interview to accompany the publication of the fund’s annual Fiscal Monitor.

Global public debt is likely to hit a record high of almost 100 per cent of the world’s gross domestic product in 2020, and the IMF expects government debt to rise significantly in proportion to national income in most advanced economies this year.

But by 2025 overall deficits will be similar to the levels the IMF had forecast before the pandemic, without the need for public spending cuts or tax increases, it said.

The crucial factor supporting this outlook for most advanced economies is borrowing costs; the IMF expects the cost of servicing government debt will stay well below the growth rate it expects these countries to achieve.

This would allow cheaper borrowing to largely offset the weaker growth and lower tax revenues that the fund predicts will result from the crisis.

By 2025, most advanced countries would “have a higher cyclically-adjusted primary deficit, but that is to a very large extent compensated for by lower interest payments”, Mr Gaspar said.

As a result, there is no need for budgetary consolidation in countries able to borrow freely from financial markets, he added. “The [public debt] ratio in our projections stabilises and even declines slightly towards the end of our projections which shows that Covid-19 is a one-off jump up in debt and with low interest rates, the debt dynamics stabilise.”

The IMF’s words will be seized upon in the US and across Europe as giving the green light to countries to invest out of the recession, rather than tightening their belts as happened in the previous decade.

The fund’s advice is a reversal of the message given in the same publication a decade ago at the equivalent stage in the financial crisis. Then, it warned that “many countries face large retrenchment needs going forward”.

The fund’s internal auditor subsequently assessed that it had been too quick to advocate austerity in 2010-11, and the IMF has now substantially revised its guidance.

This time around, more needs to be done to foster a strong recovery before considering the health of countries’ public finances, the IMF emphasised.

“We believe there is a risk of prematurely withdrawing fiscal support and policymakers that have a choice would be well-advised to be very gradual and to maintain fiscal support until the recovery is on a sound footing and the long-run scarring impacts from Covid-19 are perceived to be under control,” Mr Gaspar said.

The favourable debt projections rely on a strong bounceback in economic growth after the pandemic, and interest rates remaining much lower than growth rates. This combination is not guaranteed and Mr Gaspar stressed that uncertainty over fiscal projections was still extremely high.

Additionally, emerging economies that do not have as much capacity to borrow face “binding financial constraints” and need to assess carefully the costs and benefits of additional fiscal support during the Covid-19 crisis, the IMF said.

The fund singled out China and the US as countries that were unlikely to stabilise their public debt burdens by the middle of the decade, given their big plans for public spending and few plans for tax increases. – Copyright The Financial Times Limited 2020