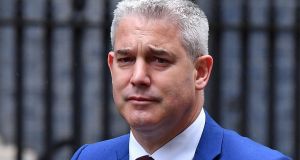 The UK’s Brexit Secretary has confirmed that under the proposed Boris Johnson Brexit deal, companies in Northern Ireland who want to sell products into Britain would have to complete export forms after Brexit.

Stephen Barclay initially told the House of Lord’s European Union Committee, which examines the UK government’s policies and actions in relation to the EU, that Northern Ireland businesses would not need to complete any new paperwork post-Brexit if they export to Britain.

The Labour peer Stewart Wood raised the issue of the possible future process for businesses in the North who trade with Britain under the new Brexit proposals in an evidence-gathering session on Monday.

In response Mr Barclay first confidently told the House of Lord’s committee that there would not be any new red tape for companies in the North because “from Northern Ireland to GB it [exports] would be frictionless”.

Minutes later, in a somewhat embarrassing retraction for the Secretary of State for Exiting the European Union, he had to backtrack on this assertion.

“Just to be clear the exit summary declarations will be required in terms of Northern Ireland to GB,” Mr Barclay stated.

Mr Wood later tweeted that UK ministers had “conceded” that under the proposed new Brexit deal “Northern Irish firms will have to complete export declaration paperwork to trade inside their own country with Great Britain”.

The Labour peer added: “This revelation confirms two things. The GB-NI border inside the UK will, from a commercial point of view, feel like a real border. The government is trying to push through a vote on the deal before the text of the Withdrawal Bill is seen for a reason: the contents are alarming.”

The disclosure by the Brexit secretary will do little to inspire further confidence among the North’s business community who are already nervous about how Mr Johnson’s proposed Brexit deal may play out on the ground in the North.

The industry group Manufacturing NI had previously warned there was the potential for “significant new frictions for some trade to Northern Ireland from Great Britain” and the prospect of a “complex and costly regime to manage tariffs for goods travelling through Northern Ireland to the EU”.

Following the Brexit secretary’s confirmation that businesses in the North would have to complete export declaration forms to sell goods into Britain after Brexit, Manufacturing NI tweeted: “This is one of the things the NI Biz community pushed hard back against when meeting the EU in October 2018 and subsequently negated by the 2018 WA [Withdrawal Agreement].

“In this new ‘deal’, it’s not clear why NI firms would need to do them. We’re in UK’s customs. A requirement for ROI [Republic of Ireland] firms though.”

The DUP MP Sammy Wilson was critical of Mr Barclay’s revelations. He tweeted: “Clear breach of UK government commitment in Joint Report of 2017 to allow unfettered access to GB market for NI businesses. How can any Conservative & Unionist MP argue this does not represent a border in the Irish Sea?!”