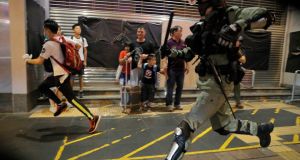 Staying with Brexit, Chris John asks why Boris Johnson performed “the mother of all U-turns” and warns that if Britain leaves on October 31st, that transition will last for 14 months. “The EU-UK free trade deal is supposed to be negotiated during that time. Good luck with that. Anyone who thinks a deal in the next few days will bring all this sorry business to an end is going to be sorely disappointed.”

A turf war has broken out between the two State tourism agencies, Tourism Ireland and Failte Ireland, over the latter’s plans to place staff in the US and Europe to tempt wealthy foreigners to holiday in Ireland. The staff would also target foreign businesses to hold conferences and other events here.

Wealthy Hong Kong investors are applyingto Ireland’s golden visa programme as violence escalates in the city. Peter Goff reports that more than 1,000 international millionaires have successfully applied to Ireland’s golden visa programme, with a further 350 applications currently going through the process. The programme has resulted in over €700 million of investment into the economy to date, he said.

US software company Qualtrics has said it plans to double its Irish workforce from 300 to over 700 “in the next few years”. It’s currently in the process of recruiting 50 more staff to fill roles in the sales, support and technical teams.

Finally, Pilita Clark recalls a nightmare long-haul flightto Australia and how a little understanding from a flight attendant turned a customer relations disaster into a triumph.