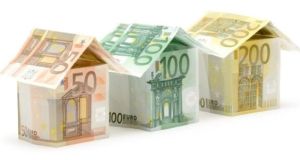 New mortgage lending in the Republic rose by €1 billion to nearly €9 billion last year, according to the Central Bank. This was the largest annual increase since 2009.

However, the annual total remains low by historical standards. Prior to the crash, new mortgage lending hit nearly €40 billion.

Interest-only buy-to-let mortgages shot up at the height of the boom and became a major arrears issue after the economy fell into recession.

“I think what the figures tell you is that mortgage lending has picked up but is still very low by historical standards,” said Cantor Fitzgerald economist Alan McQuaid.

“It is not clear whether this is a supply or a demand issue, but the strict lending rules imposed by the Central Bank and the fact that ‘ordinary’ individuals and couples trying to buy a house are being priced out of the market by cash investors suggests that demand is probably muted.

“This is unlikely to change until more housing supply comes on to the market. However, banks are being restrained too by the tighter regulations imposed on them by the authorities.”

“This suggests that consumers/households remain cautious and don’t want to be over-exposed in the case of another serious economic downturn like the global financial crisis. Uncertainty over Brexit is probably also a factor here.

“But at the end of the day credit will need to flow at a much stronger level than currently if the economy is to continue to grow strongly over the long-run in a post-Brexit environment, and the housing crisis is to be seriously addressed.”