Former minister says there are no plans for a general election 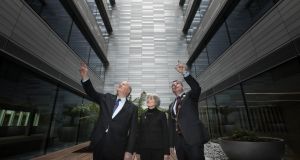 Former minister for finance Michael Noonan said on Tuesday he was confident Irish exporters will be “able to cope” under a no-deal Brexit.

Mr Noonan said “uncertainty generated by the British parliament” over the UK’s plans to exit the EU on March 29th, was “bad for business, bad for investment and bad for trade”.

However, he said he believed exporters could “ride out” a no-deal storm, adding that Ireland should not be too concerned about Brexit.

“It’s disappointing but, that being said, Irish industry is very resilient – the export side is very resilient. And, something that has never been discussed is the fact that, when the [Brexit] referendum took place, the pound sterling was trading at around 72 cents. It was [trading at] 86 cents this morning, and it went to 90 cents two weeks ago. That’s a devaluation of over 30 per cent , and Irish exports went up to the UK.”

“What I’m saying is that a devaluation of sterling is almost the equivalent of a tariff of the same magnitude, and yet the Irish exporting [industry], and that’s an awful lot of people, have succeeded in holding their position, and increasing their position in the English market. So we are resilient, we are able to cope.”

Mr Noonan was speaking in his native Limerick where he officially cut the ribbon on the €17.6 million Gardens International development, which is offering 112,000sq ft of office space in the heart of the city. Aircraft leasing firm Nordic Aviation Capital are set to become the first tenants.

Ireland should not be worried about Brexit, he continued: “I don’t think so. If we could, on the export side, maintain our exports and indeed increase them to the UK, against devaluation of [sterling] at over 30 per cent, well, then it seems to me the Irish export sector is very resilient. I think, with the exception of some of the food items, we’ll ride it out. Certainly, there will be a set back, but it won’t be catastrophic.”

Mr Noonan said there are no plans for a general election on the back of Brexit.

“The government is three years in office and there’s another two years to go. That’s not what Micheál Martin tied the confidence and supply [deal] to. He said he wouldn’t have an election now because of Brexit, but he tied the period of the Government to one more budget, so that carries it on. His definition of a budget is not only the announcement on budget day, but the Finance Bill, and the Social Welfare Bill; and they won’t be through until next Christmas. So, it seems to me that no one is thinking about an election at the moment.”

Mr Noonan said he believed Theresa May’s Brexit negotiations with the EU “didn’t appear to be a smooth or efficient”, adding that the British prime minister did not deserve all of the blame for the current situation.

“I’m sure there was a lot of people at fault. She was in a difficult position, and she still is,” he added.

Mr Noonan said he was confident the EU would not cave-in at the 11th hour to Mrs May’s current Brexit plans.

“I’ll tell you this much: the EU won’t cave in anyway. I know those people very well – I worked with them for years. There’ll be no cave-in.”