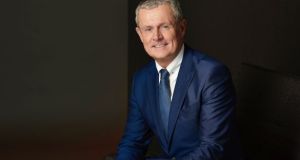 Francis Martin is the first person from Northern Ireland to be appointed president of an organisation which has been representing businesses in Northern Ireland along with the rest of the United Kingdom for more than 156 years.

Francis Martin has a reputation as a deal maker in Northern Ireland. It is a trait which could prove to be very useful as he takes up his latest appointment – president of the British Chambers of Commerce.

Martin is the first person from the North to be appointed president of an organisation which has been representing businesses in Northern Ireland along with the rest of the United Kingdom for more than 156 years.

The chamber is one of the most influential business voices in the UK: it represents thousands of firms which employ in the region of five million people. It currently has 52 accredited chambers stretching from Ayrshire to Cornwall – not forgetting the Belfast chamber of which Martin is a former president.

It is also growing its overseas membership rapidly, and now features chambers in Chile, Poland and Turkey.

While all may have issues in common, Martin is acutely aware that each chamber and its members have their own specific concerns, not least when it comes to Brexit and the issues which have starkly divided the UK.

The chamber remained “non-partisan” in the run-up to the UK referendum although its former director general, John Longworth, was forced to resign after declaring during the campaign that, in his own personal view, the UK could be “brighter” outside of the European Union.

Now the decision has been taken, it is time for Martin to make sure that all the different voices he represents as president are heard where it matters.

He acknowledges not all those voices are singing from the same hymn sheet – remember Scotland and Northern Ireland voted to remain in Europe while Wales and other parts of the UK voted overwhelming to leave, and even within regions there are wildly divergent views – but Martin is confident he will give businesses the voice that they need regardless of where they are located.

“Businesses by their very nature are resilient. They are used to adapting but they also need government to take swift, co-ordinated action to stablise markets and to provide clarity. Businesses want and need timeframes. We want to see leadership from Westminster,” he says.

But Martin is also conscious that many businesses and parts of the UK are still “in shock” about the Brexit decision.

“Many people genuinely believed that it would not happen and are still suffering from a kind of shock over the vote,” he says. “These are unprecedented times when we are seeing the dismantling of structures that people have been accustomed to, in some cases all or a considerable part of their lives.

“The ensuing market chaos, the exchange rates volatility has all contributed to the sense of anxiety and possibly fear of what the future may hold that some businesses are experiencing.”

But in keeping with his reputation – Martin was recently named Northern Ireland Dealmaker of the Year – he says it is also crucial that the new prime minister Theresa May gets the best deal possible for the UK in the Brexit negotiations.

“There is a new reality and we have to work with the cards that we have been dealt and we have to move forward. We cannot talk ourselves into a recession. That would be a self-fulfilling prophecy that nobody wants.

“We need to get the right deal with the EU, we need to see government investment in infrastructure and the right incentives in place for investment. Businesses have to plan for their future,” he said.

The signal by the former chancellor George Osborne that it could introduce possible lower rates of corporation tax – to below 15 per cent – may not win it many new fans in Europe but it is likely to be the first of a series of sweeteners to encourage businesses to maintain and locate investment in the UK.

When it comes to corporation tax, Martin is mindful that, for Northern Ireland, the possibility of a lower rate in general for the UK brings a whole new set of problems.

“I’ve never believed it was the silver bullet for Northern Ireland. I do believe it would deliver advantages but we should not be seeking to sell Northern Ireland as a low tax economy,” he says. “What we should be promoting, where possible, is its affordability and the skills and talent of the workforce that is available.”