Mortgage arrears may be caused by Irish banks' leniency - IMF 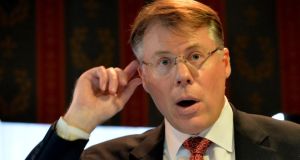 The exercise of extensive forbearance by Irish banks on home loan defaults is “likely” to have contributed to the accumulation of arrears in the aftermath of the crash, says an IMF working paper.

While the paper suggests the economic benefit of temporary forbearance and loan modifications for struggling households could outweigh their costs, it says this depends on the circumstances prevailing in the country.

“Extensive forbearance, such as interest-only payments, helped smooth consumption but allowed arrears to build,” the paper says of the situation in Ireland.

“Complicated by barriers to repossession and drawn out insolvency reforms, mortgage workout was much delayed. Resolution only began in earnest after the Central Bank imposed workout targets once the insolvency reform neared completion and signs of a recovery emerged.”

The paper, Resolving Residential Mortgage Distress: Time to Modify?, was written by IMF economist Jochen Andritzky and its publication was approved by Craig Beaumont, the fund’s mission chief to Ireland. However, the IMF says such papers do not necessarily represent its views or its policy.

“In housing crises, high mortgage debt can feed a vicious circle of falling housing prices and declining consumption and incomes, leading to higher mortgage defaults and deeper recessions,” he writes.

“In such situations, resolution policies may need to be adapted to help contain negative feedback loops while minimising overall loan losses and moral hazard.”

He notes that Irish house prices halved by 2012 relative to their 2007 peak and adds that construction collapsed, contributing to mounting job losses and sharp falls in income. Domestic demand was further depressed by a rise in household savings to reduce debt, and every fifth mortgage defaulted by 2013.

“Results for Ireland show that arrears not only peaked far above projected levels, but also accumulated over a longer period,” the paper says.

“This result is likely driven by the large cohort of vulnerable borrowers (about half of all mortgages were originated near the peak of the boom between 2005 and 2007), implicit forbearance and the lack of enforcement action.”

The paper also finds that several Central Bank initiatives, including work in 2012 on durable loan modification options, had “little impact” on accelerating the number of long-term restructures.

“Ireland entered the crisis with no experience of significant mortgage distress.”

The paper says the failure of the original Irish framework to cope with the crisis reflected three factors: a dysfunctional bankruptcy regime, lack of lender experience with workouts and strong political resistance to repossession.