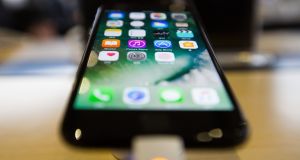 An iPhone 7: Apple accused the European Commission of chasing a “predetermined outcome” in its investigation of Ireland’s tax dealings. Photograph: SeongJoon Cho/Bloomberg

The European Commission has accused Ireland of “inconsistent” application of tax rules to multinationals, in a move that could have implications for other US companies operating in Ireland.

Publishing the full version of its controversial finding against Apple on Monday, the commission said Ireland had failed to justify its “selective” treatment of Apple, a charge that both the Department of Finance and Apple vigorously deny.

As part of its three-year investigation into two tax rulings offered by the Irish authorities to two Apple subsidiaries in 1991 and 2007, the commission examined similar tax arrangements relating to 14 other companies operating in Ireland.

While the names of the companies were redacted from the final document, it is understood they include high-profile US multinationals operating in Ireland.

In total, 19 separate tax rulings involving 14 multinationals were submitted by Irish authorities to the commission in 2013 and 2014 as part of its state-aid investigation into Apple.

The commission said that, in examining these rulings – which all relate to multinationals with similar subsidiary tax structures to Apple’s Irish subsidiaries – it “was unable to identify any consistent set of rules that generally apply on the basis of objective criteria to all non-resident companies operating through a branch in Ireland”.

EU officials declined to speculate on whether these tax rulings offered to other companies could be the subject of further state-aid investigations by the European Commission.

While the Commission is basing its legal case against Ireland around its interpretation of transfer-pricing rules and how they applied to two Apple subsidiaries, it also put forward an alternative legal position which argues that the tax rulings offered to Apple were not consistent with those offered to more than a dozen multinational companies.

As the substance and process surrounding the commission’s investigation came under fire from Dublin, Apple launched its own legal challenge at the European Court of Justice on Monday morning. In a statement it accused the European Commission of chasing a “predetermined outcome” in its investigation of Ireland’s tax dealings with Apple.

“The Commission took unilateral action and retroactively changed the rules, disregarding decades of Irish tax law, US tax law, as well as global consensus on tax policy, that everyone has relied on,” it said.

It added that, if the opinion were allowed to stand, Apple would pay 40 per cent of all corporate income tax collected in Ireland, a situation that would be “unprecedented” and would selectively target Apple.

At the core of the commission’s case against Ireland is an assessment that the company unfairly channelled taxable profits from sales through a “head office” division of a non-resident Apple subsidiary in Ireland. Instead, it believes the sales should have been channelled through the Irish branch of the subsidiary which would have subjected the profits to Ireland’s 12. 5 per cent corporate tax rate.

Both Ireland and Apple assert that the taxable profits the commission ascribes to Ireland should in fact be attributable to the United States where most of the intellectual property and taxable activity took place.

“All important decisions within ASI [Apple Sales International] and AOE [Apple Operations International] were made in the US, and the profits deriving from these decisions were not properly attributable to the Irish branches of ASI and AOE,” the Department of Finance said in a statement issued ahead of the opinion’s publication, referring to the two Apple subsidiaries at the centre of the investigation.

The €13 billion ruling against Ireland over its tax dealings with Apple is by far the most significant state-aid case in the European Commission’s history.

1 Fianna Fáil may have just pressed the pause button on the property market
2 UK to prioritise EU trade deal over one with United States
3 Who are Ireland’s 17 billionaires?
4 Saudi prince’s WhatsApp account ‘directly involved’ in Bezos hack
5 European investor acquires Harcourt Road offices for €55m
6 My father in a nursing home wants to gift me his house
7 Dunnes premature in challenging Point Village resolution move, Supreme Court finds
8 Are there annual limits on inheritances or gifts to a child?
9 Irish organisations struggle to comply fully with GDPR
10 Dublin Airport contributes €10bn to economy - study
Real news has value SUBSCRIBE