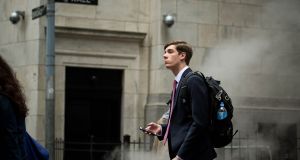 If 2015 was a dream year for Wall Street’s top dealmakers, 2016 is starting to take a nightmarish turn.

Some of the mega transactions that had champagne corks popping in boardrooms are running into competition problems and, in the case of pharmaceutical firm Pfizer’s $160 billion (€140m) takeover of rival Allergan, political opposition to a deal that envisaged the biggest drug company in the US moving to Ireland to lower its taxes.

The US Treasury unveiled new rules this week that, while they did not name Pfizer and Allergan, had provisions that targeted a specific feature of their agreement and prompted both parties to walk away from what would have been the second-largest deal of all time.

The move by the Obama administration to suddenly change the rules has sent a chilling message to dealmakers and comes on top of a number of legal challenges to big transactions such as Halliburton’s takeover of rival oil services company Baker Hughes on competition grounds.

The political uncertainty and competition concerns mean that firms will think twice about future tie-ups that consolidate industries and move tax dollars offshore.

“As uncertainty increases on multiple fronts, companies are markedly more cautious and the number of transformational deals worth $10 billion or more has significantly dropped this quarter compared to last year,” said Luigi Rizzo, head of mergers and acquisitions for Europe, the Middle East and Africa at Bank of America Merrill Lynch.

The new US rules do not directly affect most inversion deals, in which a US company buys a foreign counterpart and then moves abroad to lower its tax bill, but they have sent a message to company bosses about the risks of attempting to move their tax addresses overseas.

Tax inversions have been a political hot button issue in Washington for years.

The rules unveiled this week were the Obama administration’s third effort to stop US companies renouncing their US citizenship but they are only a temporary stopgap.

Formal legislation to overhaul US tax rules would be needed to bring a permanent end to the practice.

“We have succeeded in making it significantly harder for companies to strike inversion deals and redomicile overseas,” said US congressman Peter Welch. “But we still need action in Congress. ”

With a US presidential campaign looming later this year there is much uncertainty about what shape such legislation would take, making deals all the more difficult to strike.

Last year was a record for M&A and a bumper year for mega matches. Out of the $4.6 trillion in deals signed, the number of individual transactions that exceeded $30 billion in value was 18 compared with seven deals worth more than $30 billion in 2014, Thomson Reuters data showed.

But the consequence of greater consolidation is increased scrutiny by competition officials. That was exemplified on Wednesday by the US government filing a lawsuit to stop Halliburton from buying Baker Hughes, arguing the combination of the No 2 and No 3 oil services companies would lead to higher prices in the sector.

The Justice Department and Federal Trade Commission (FTC), which enforce competition law, have filed cases to stop an unusually high number of deals in the past 18 months. FTC officials are in court this week to block a merger between Staples and Office Depot.

“It isn’t just the number of proposed deals that makes this a unique moment in antitrust enforcement; it’s their size and their complexity,” US attorney general Loretta Lynch said in a speech on Wednesday.

“This represents a remarkable shift toward consolidation and it presents unique challenges to federal enforcers in our work to maintain markets that serve not just top executives and majority shareholders, but every American.”

In Europe, meanwhile, talks between Orange and Bouygues to create a dominant French telecoms operator collapsed last week, amid competition concerns and a stand-off between Martin Bouygues and French economy minister Emmanuel Macron about the clout the billionaire would have gained in the former state monopoly, according to sources.

Investment banks on the Pfizer and Allergan deal, including Goldman Sachs, JP Morgan, Centerview and Moelis, lost more than $200 million in fees when the companies walked, according to data from consultancy Freeman & Co.

Faced with greater hurdles to get deals through, some investment bankers are rethinking how they want to structure their payoffs, including trying to get more cash upfront rather than a big check after a deal closes, a source said