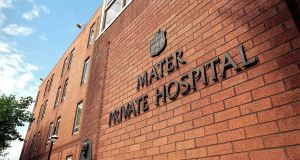 Quoting an email to staff from the Mater Private Hospital group’s chief executive, the Business Post says he warned them the healthcare sector would not escape the full impact of a recession.

The Mater Private Hospital group has warned staff that its ability to pay wages and its debts “is now under threat” and that the “danger to the Mater Private’s future is real and immediate”, the Business Post reports. Quoting an email to staff from the group’s chief executive, it says he warned them the healthcare sector would not escape the full impact of a recession.

The paper also carries a story on how Revenue secured almost €500 million last year from investigations into tax avoidance, including from the construction sector, medical doctors and offshore schemes used by wealthy individuals.

In Covid-19 coverage, it reports how Northern Ireland’s contact tracing app is to be built by the same firm, Nearform, which developed the Republic’s technology. Meanwhile, house builder Cairn Homes is offering buyers a garden office pod as an optional extra amid expectations that working from home is likely to become more common.

All the newspapers report on the formation of the new Government and how Micheál Martin, the new Taoiseach, has vowed to reboot the economy with “urgency and ambition” as leader of a historic three-party coalition.

Arguing against the programme for government’s focus on small-scale local and indigenous enterprises, Conor Skehan writes in the Sunday Independent that anyone saying Ireland has too much [foreign direct investment] betrays a profound incomprehension of Ireland’s place in the world. “Policies which promise to focus on non-export focused start-ups are just promises to fail.”

The paper also reports Chinese investors have donated more than €20 million to an Irish social housing charity, iCare, in return for residency status in Ireland.

It also has a story on a new survey that shows six in 10 mortgage applicants have received a gift from “the bank of mum and dad”.

In its business coverage, the Independent reports how US private equity firm Madison Dearborn is in discussions to take Irish-Canadian company IPL Plastics private. It also has a story on Irish publican Louis Fitzgerald who has bought the well-known Galway city pub Tigh Neachtain.

The Sunday Times reports on a survey of 50 top retailers that shows fewer than one in five expect to miss the July 1st deadline for their third quarter rental payments.

The UK’s Mail on Sunday’s reports on an interview with prime minister Boris Johnson in which he promises a “building blitz” of hospitals, schools, homes and infrastructure projects to “save the British economy from disaster”. The paper says details of the plan, which will cost tens of billions of pounds, will be announced on Tuesday. The Observer also covers Mr Johnson’s pledge but also carries warnings from Labour that unemployment could “soar to levels not seen since the 1980s”.

1 Belgium helps Ireland to a Brexit boon
2 Can Grafton Street stop the flood of closures?
3 ‘My rent here is so low it’s a joke’
4 New Powerscourt Springs hotel to open in defiance of virus gloom
5 AIB to compensate another 1,100 tracker mortgage holders
6 This charming man: how Paschal Donohoe won the Eurogroup presidency
7 ‘Sad day’ for House of Ireland as tourism retailer goes out of business
8 What is Covid Tracker Ireland?
9 How to . . . move (almost) everything to your new phone
10 Goodbody’s planned €155m sale to Bank of China falls through
Real news has value SUBSCRIBE