Pubs, hairdressers and creches: how comfortable are customers?

Shane Curran who owns the Kings Head Barber Shop on Sandwith Street Upper in Dublin has to had to make significant changes to his premises ahead of next week’s reopening as Covid-19 restrictions ease. Video: Bryan O’Brien 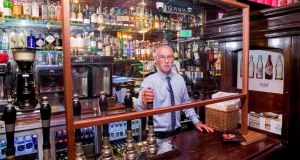 More than one in five people say they feel very uncomfortable about the prospect of going to a pub, even with two metre social distancing in place. And that rises to 40 per cent where social distance is reduced to one metre.

The figures come from a survey by the Central Statistics Office on the social impact of Covid-19 and have been published as pubs serving food prepare to reopen on Monday.

The survey examines how comfortable people feel about certain activities as Covid-19 restrictions are eased across the State.

Opinion is evenly split about the imminent opening of hairdressers and barbers, with 41 per cent comfortable getting their hair done and a similar number wary of doing so to a greater or lesser degree.

And as the Government looks to open up the childcare sector in an effort to help parents get back to work, almost three in five respondents are not comfortable with the prospect of sending their child to childcare or a creche.

Parents are also uncomfortable about their children engaging in contact sports, with almost 55 per cent opposed while just a third say they are comfortable in doing so.

“The findings of the survey illustrate how comfortable or otherwise Irish people are feeling at the prospect of undertaking what we would have considered to be everyday activities prior to Covid-19,” said CSO statistician Brian Cahill, “and [it] highlights the impact Covid-19 may have on people’s behaviour into the future.”

He noted that, while many respondents are worried about going to a pub, people are significantly more comfortable with the prospect of eating in a restaurant. Just 12.9 per cent of respondents said they would feel very uncomfortable in a restaurant that had two metre social distancing in place, rising to 28.7 per cent at one metre.

Many restaurants have said it will not be economically viable for them to open their doors if two-metre social distancing rules are in place.

Other scenarios in which respondents said they would not be comfortable is the prospect of travel on public transport (63 per cent) or taking an international flight (78 per cent).

The survey also detailed how attitudes vary between men and women. While almost one-third of men said they would be comfortable or very comfortable going to a pub with two-metre social distancing in place, only 23 per cent of women said the same.

However, 47 per cent of women were comfortable having six people visit their home compared to 44.8 per cent of men.

Just under half of the women surveyed said they felt comfortable or very comfortable with the prospect of going to a hairdresser or barber compared to 34.9 per cent of men.

Attitudes toward attending healthcare appointments remains a concern for some with 18.5 per cent saying they felt uncomfortable or very uncomfortable at the prospect of attending a GP appointment, while just over a third of people expressed concern over a hospital appointment.

The CSO’s survey was carried out between June 10th and June 17th and was based on a sample of 5,566 people.