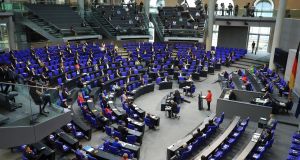 The plan will allow Bundestag MPs to get the information they need on euro crisis bond-buying during their last sitting before the summer break. Photograph: Bloomberg

Until now such a policy was taboo, given the political independence of Germany’s Frankfurt-based central bank.

But the unorthodox decision is part of a creative response to the May 5th ruling by Germany’s constitutional court, challenging the proportionality of ECB purchase of bond-buying to stabilise the euro.

The Karlsruhe court gave MPs in Berlin, and Angela Merkel’s administration, three months to find out what made the bond-purchases necessary. If not, the court said the Bundesbank must be ordered to withdraw from all such bond-buying programmes.

Ahead of the first briefing in August, the Bundesbank will pass on next week to the federal government ECB reports justifying bond-buying.

For the German central bank to act as intermediary in this way, in particular on monetary policy it has consistently criticised, makes for a curious division of labour.

But unusual times make for strange alliances, particularly after a ruling seen in my quarters around Europe as an attack on the independent ECB and the European Court of Justice in Luxembourg.

Neither institution is legally answerable to Karlsruhe – or Berlin. But with the Bundesbank as intermediary, Bundestag MPs can secure the information they need on euro crisis bond-buying during their last sitting before the summer break.

Otherwise, some fear Germany’s future participation in a newer, €200 billion ECB bond-buying programme launched in response to the Covid-19 pandemic.

In a letter to Bundestag MPs, Dr Weidmann – a former adviser to the chancellor, Dr Merkel – said he was confident the “institutions involved will succeed in finding a solution that meets the federal constitutional court’s specifications but also allows for independent monetary policy”.

Dr Weidmann insisted in the letter that the Bundesbank, which holds a 26 per cent stake in the ECB, is legally beholden only to German law.

If a compromise is not found, the Bundesbank president conceded that his institution, “according to the jurisprudence of the federal constitutional court cannot participate in organs . . . of the European Union. that touch [Germany’s] constitutional identity”.

Dr Peter Huber, the Karlsruhe judge behind the May decision, accused the bank of acting like a “master of the universe”. Instead he told a German newspaper it should “take responsibility in the eyes of the public” to explain how bond-buying is part of its mandate.