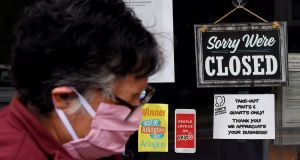 The global coronavirus pandemic has sparked an economic “crisis like no other,” sending world GDP plunging 4.9 percent this year and wiping out $12 trillion over two years, the IMF said. Photograph: Getty Images

The coronavirus crisis will have an even bigger negative impact on the global economy than initially thought, the IMF said on Wednesday, warning that government deficits were set to soar as a result.

The global economy will shrink 4.9 per cent in 2020, the IMF said, a downward revision of 1.9 percentage points from its last forecasts in April; Gita Gopinath, the fund’s chief economist, said it was an “unprecedented crisis”.

In April the IMF said 2020 would be the worst global economic contraction since the Great Depression of the 1930s.

“No country has been spared,” said Ms Gopinath. “Emerging market [and] developing economies and advanced economies have all been very badly hit.”

The crisis has cost governments around the world more than $10 trillion (€8.8 trillion) in lost revenues and support measures such as additional spending, business loans and guarantees, the fund estimated. As a consequence, global public debt is expected to hit a record 101 per cent of gross domestic product this year, up 19 percentage points year on year, it warned.

Ms Gopinath said public debt was projected to surpass the record level it reached during the second World War, as a proportion of GDP. Countries would need to focus on reining in “wasteful” spending, widening the tax base, minimising tax avoidance and “greater progressivity in taxation in some countries”, she added.

The global economy was experiencing “a large adverse aggregate demand shock from social distancing and lockdowns, as well as a rise in precautionary savings”, the IMF said. In addition, the fund noted that “investment is expected to be subdued as firms defer capital expenditures amid high uncertainty”.

By the end of next year global GDP is set to be 6.5 percentage points smaller than the fund had forecast at the start of 2020.

Advanced economies – notably the US and European countries – will bear the brunt of the damage. They are expected to shrink 8 per cent this year, a steeper contraction than the 6 per cent estimated by the fund in April. Emerging economies will shrink 3 per cent – far more than the 1 per cent contraction it forecast in April.

The biggest downgrade was for France, which is expected to contract 12.5 per cent this year – over 5 percentage points more than forecast in April – closely followed by Spain, with a 4.8 percentage point downgrade, taking its forecast contraction to 12.8 per cent.

The US will take the biggest hit to its budget; it will run a deficit of nearly 24 per cent of GDP this year, the IMF said.

“Elevated debt levels . . . could constrain the scope of further fiscal support – and will pose an important medium-term challenge for many countries,” the fund warned.

The deterioration in the IMF forecasts was driven by its expectation that there would be a more gradual recovery in the second half of this year than it had expected, and because voluntary social distancing before lockdowns were imposed has dealt a greater blow to economic activity than thought, as fears of catching coronavirus led people to be cautious.

The IMF called for greater international collaboration to tackle the virus and its economic consequences, and warned the recession would have a long-lasting effect on global output. Although it expects a sharp recovery in 2021, most economies will fail to regain their pre-crisis output levels.

However, the IMF forecast remains more optimistic than that of the OECD, which said this month that the global economy was likely to contract by 12 per cent in the first half of 2020 and by the end of 2021 it would still be below the level it reached at the start of 2020.

The fund warned on Wednesday that the impact on low-income households would be particularly severe, “imperilling the significant progress made” in reducing extreme poverty since the 1990s. The fraction of the world’s population living on less than $1.90 a day has fallen below 10 per cent in recent years, from 35 per cent in 1990, but the contraction in developing economies is likely to increase global inequality, the IMF said.

1 MSD buys Takeda biologics plant in Dunboyne
2 State’s biggest landlord records 30% rise in rental income
3 Irish tourism must also help itself to survive the pandemic
4 Facebook agrees Irish wind-farm deal with Brookfield in Tipperary
5 ‘Saudi Arabia is where the opportunities will happen in future’
6 Prosecutors suspect Wirecard was looted before collapse
7 Trump signs executive orders banning TikTok and WeChat
8 What will the office market look like after the great remote working experiment?
9 How your country’s history affects the way you think
10 Refurbished Café en Seine doubled sales to €9.5m before pandemic
Real news has value SUBSCRIBE