Summer rebound ‘petered out’ amid Covid-19 resurgence and Brexit fears 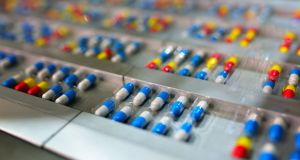 A rebound in Irish manufacturing activity over the summer “came to a halt” in September, as output, new orders and employment all declined, the latest purchasing managers’ index (PMI) from AIB shows.

The headline PMI reading for the month arrived at exactly 50, the mark that separates expansion from contraction, suggesting that the sector overall was treading water rather than shrinking. But the September stagnation followed a reading of 52.3 in August and put to an end a three-month recovery in the goods-producing sector.

AIB said the individual components of the PMI also revealed a weaker picture for the manufacturing sector than the headline figure suggested.

Output and new orders went into reverse, while employment and stocks of purchases remained in contraction territory.

The recent rebound in output “petered out” after a near record increase two months’ previously, AIB said. The rate of contraction was modest, however, and much less severe than the drop-off seen in the March-May period.

Irish manufacturing employment has now declined in nine of the past 11 months, although the September fall was the smallest registered in 2020 so far. Weaker sales, cost-cutting, the non-replacement of leaving employees, and students returning to education were among the reasons cited by businesses.

The general weakness was only offset by a marked lengthening in suppliers’ delivery times, which is normally a sign that suppliers are busy, but is now reflecting shortages and transport difficulties arising from the pandemic.

AIB chief economist Oliver Mangan said the weakening demand due to a resurgence in Covid-19 cases and associated restrictions was the main factor behind the stalled activity, but Brexit and the lack of progress on UK-EU trade talks was “another source of growing uncertainty” among manufacturers.

“The details of the September survey show clear signs of a loss of momentum in manufacturing,” he said.

Despite the ongoing challenging conditions, businesses in the manufacturing sector “remain hopeful” that the environment will improve in 2021.