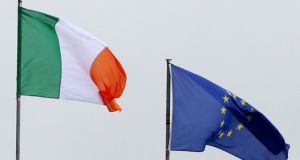 The emerging German tax proposal is very different from the 2011 one, responding to many problems identified with the original version. Photograph: Sam Boal/Photocall

Taxation remains a national – not a European Union – competency and, since joining the EU (EEC) in 1973, Ireland has consistently opposed harmonisation of any taxes at an EU level for fear that this might impact on our corporation tax regime.

Given that unanimity would be required to make any change, Ireland has so far resisted EU pressures in this area. However, this approach has seriously upset our allies in the EU, and this may eventually have a cost – some day you may need friends.

Ireland has in the past also opposed harmonisation of other taxes, in spite of the fact that some of the mooted changes might have been favourable for domestic policy purposes. In particular, Ireland opposed an EU-wide carbon tax in 1992. If that tax had gone ahead, EU and Irish emissions of greenhouse gases would be much lower today and the challenge of decarbonising Irish society by 2050 would be less daunting, and much less expensive.

The famous economist John Maynard Keynes suggested in 1936 that applying a small tax on financial transactions would discourage harmful speculation by making frequent buying and selling of a financial instrument expensive and, hence, unprofitable. In the light of this research, the European Commission in 2011 proposed the introduction of such a tax on a wide range of financial transactions.

Ireland already has this tax in the form of stamp duty. Stamp duty was originally introduced in England at the end of the 17th century and it has been in force in Ireland for at least a century and a half. Every time shares in an Irish company are traded, stamp duty is payable on the transaction.

This reduces the incentive to speculate in the shares by frequent buying and selling. However, it only applies to sales of Irish-registered shares. The EU proposal would have cast a much wider net, covering many other financial transactions, theoretically aiming to hit areas where “wasteful” or risky speculative activity might take place.

In 2012, a joint study by the Economic and Social Research Institute and the Central Bank looked at the implications for Ireland of joining with the rest of the EU in introducing a financial transactions tax. The report looked at experience elsewhere with such taxes. For example, Sweden in the 1980s introduced such a tax but, where financial instruments were frequently traded, these transactions just moved offshore. The result was little or no tax revenue from trading in financial instruments, so it proved to be an ineffective measure.

The ESRI-Central Bank study also showed that the banking system in Ireland (and elsewhere) relies on financial markets to manage any short-term excess or shortage in their funds. This is done by lending to or borrowing from other banks for a few days. However, the research showed that even with a very low rate of tax on individual transactions, if these transactions took place every few days the ultimate cost could be very high and impact on banks’ management of their liquidity.

In addition, the study showed that trading in financial instruments may also allow companies to insure against events such as changes in exchange rates: these transactions can be valuable in helping businesses manage risks. Finally, the research showed that because Ireland already had such a tax on share trading, Ireland would have earned little additional revenue from any wider financial transactions tax.

Overall, a conclusion from the study was that the tax was probably not a good idea for Ireland, but that it might be a “pawn” worth sacrificing to protect the corporation tax regime.

Since the financial transactions tax was first mooted by the EU in 2011, a coalition of EU members has slowly progressed this idea, and this autumn it is likely that the German presidency will propose an amended version of the tax. The emerging German proposal is very different from the 2011 one, responding to many of the problems identified with the original version. Today the proposed tax is similar to Irish stamp duty, though the minimum rate would be well below the Irish rate of stamp duty.

This time round it might be politic to join in the revised EU proposal, showing that Ireland does not reject measures which would make the company sector pay a fair share of tax. Provided that the EU version of the tax does not require Ireland to reduce the rate of stamp duty, the impact on the Irish economy would be very limited. However. it is also unlikely to mean much in the way of any extra tax revenue.