Italy sold €6.75bn of debt over four bonds, at the top of its planned range for the issue 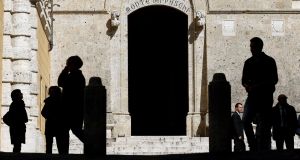 The main entrance of the Monte dei Paschi bank headquarters in Siena. Earlier this week, the ECB told the bank its capital shortfall had risen to €8.8 billion. Photograph: Max Rossi/Reuters

Italian government bond yields held near two-week lows on Thursday after the country’s borrowing costs fell at the final auction of the year, in a sign of resilient demand as the country grapples with a banking crisis.

Italy sold €6.75 billion of debt over four bonds, at the top of its planned range for the issue.

Borrowing costs had risen sharply at the last auction in late November as investors fretted about looming political instability in the wake of a December 4th referendum on constitutional reform. Prime minister Matteo Renzi resigned after voters rejected the proposals.

“The amount issued today was relatively low, so it was easily sold,” said BBVA strategist Jaime Costero Denche. “They usually sell about €8 billion of BTPs.”

Italy’s benchmark 10-year bond yield was down 2 basis points at 1.82 per cent, holding near a two-week low hit ahead of the auction.

The sale took place against a backdrop of intense focus on Italy’s banking sector and the future of troubled lender Monte dei Paschi, which has requested aid from a new €20 billion state fund to help lenders in distress.

Efforts to clean up the banks and a smooth transition to a new prime minister, Paolo Gentiloni, have helped Italian bonds recover from losses made in the run-up up to the referendum.

Still, there are concerns about the strength of the bailout fund. Earlier this week, the European Central Bank told Monte dei Paschi its capital shortfall had risen to €8.8 billion from the €5 billion indicated previously, raising questions about whether funds earmarked by the government would be enough to cover the requirements of the sector.

In a note, DZ Bank analyst Daniel Lenz highlighted the implications of state subsidies for banks on Italy’s fiscal position and in turn its ratings outlook.

“The effects of the subsidies on the state finances are not without an explosive aspect,” he said.

The link between Italy’s banks and the bond market is a major concern for investors. Banks, which hold large amounts of government debt, have been hit by worries over their exposure to bad loans built up during years of economic downturn.

Italy’s Treasury said last week that it sees tougher conditions for debt issuance in the year ahead.

Still, BBVA’s Costero Denche said he saw some supportive factors for Italian bond sales next year. “We are going to get QE (quantitative easing) continuing, so that support will still be there. Second, the hunt for yield will possibly continue and if that happens the periphery as a whole should benefit,” he said.