Global market for most professional salaries is rigged, unlike steel and coal workers’ pay 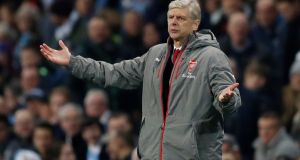 Google the phrase “spirit of Christmas’ and the first hit directs you to a website that describes itself as “The Home of Christmas Shopping”. To moan about the commercialisation of Christmas is now as traditional as a mince pie or a 12-pub drinking binge. “Money isn’t everything” is a wistful sentiment that properly belongs in the post-truth lexicon.

The nearest thing the Premier League has to a philosopher is the Arsenal manager Arsène Wenger. One of his seasonal tasks is getting irritated with journalists who ask him about contract talks with star players.

This year, Wenger’s problem is particularly acute because his two leading – and most costly – players are up for renewal. Wenger has publicly tried to persuade Alexis Sanchez and Mesut Ozïl that money isn’t everything. His wonderfully old-fashioned idea is that club loyalty and other fuzzy factors should also appeal to young men who already have more money than they will ever be able to spend. Even Wenger struggles to keep a straight face when he talks like this.

The Premier League – and professional sport the world over – regularly reminds us that the only thing that matters is money. But often in the most peculiar of ways. Contract talks, supposedly private, are often conducted in the open. In banking, salaries are always “comp”, in football they are always “wages”, the last vestige of the sport’s working class roots. And they are always weekly wages, another touching attempt to describe, in ordinary terms, money beyond the dreams of avarice.

Lloyd Blankfein is the chief executive of Goldman Sachs, whose salary, like many senior executives of listed companies, is publicly reported. In Goldman’s most recent financial year, he grossed $23 million (€22 million). His is by no means the largest pay packet on Wall St. But the “great vampire squid wrapped around the face of humanity” – Rolling Stone magazine’s alternative name for the bank – always attracts the most attention.

To Sanchez’ eternal credit he is reported to be willing to stay at Arsenal for around €345,000 a week. He must have been listening to Wenger’s appeals to his better self.

The deeper question that even the philosopher Wenger will not touch with a barge pole is, of course, the L’Oréal one: are they worth it?

Primitive economics teaches that they are: in a competitive market place we are paid for what we produce. If we are not, we are either being ripped off (by our employers) or we are, in the jargon, “rentiers” (we are ripping somebody else off).

Few of us get irritated by Premier League wages, but executive pay levels are subject to ever-increasing levels of incandescent rage. Particularly the pay of bailed-out bankers.

In other occupations, not so much: the dirty secret of becoming a financial sector chief executive is that pretty much anybody can do the job; it isn’t particularly skilled, relatively speaking. If there was a properly competitive market for banking executives, they would still be handsomely rewarded, but they would be paid a fraction of Sanchez’ wages.

Most financial executives work hard (who doesn’t?) but, if they are honest, they would acknowledge the role that being in the right place at the right time has played in their success.

In fact, the global market for most professional salaries is rigged. The world is currently feeling the political consequences of exposing car, steel and coal workers’ wages and jobs to the gales of international competition. There is very little commentary about the ways in which the pay and status of doctors, lawyers and accountants are protected and shielded from globalisation. We have erected massive and insurmountable barriers to trade to protect these groups from the forces that have destroyed the communities dependent on smokestack industries.

The Gospel of St Matthew in the New Testament contains the parable of the vineyard, the one where workers get upset about late arrivals earning as much as the early risers. Jesus could have had in mind bonus time at an investment bank: it is a wonder of the modern world to witness someone struggle to contain their elation at being given a life-changing amount of money, only for their emotions to switch to explosive rage when, later on, usually in the wine bar, they find out what their co-workers got.

There are, of course, honourable exceptions to rapaciousness. Or perhaps contradictions: those bonus recipients do sometimes do wonderful things with their money. But that’s another age-old philosophical question: did the robber barons Carnegie, Mellon, Rockefeller and the rest justify their existence with their great acts of charity? Will the billionaires of Donald Trump’s cabinet? Merry Christmas.