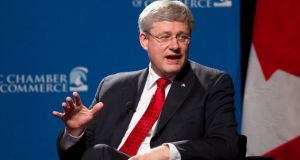 Canadian prime minister Stephen Harper: few of his incremental reforms can be described as radical but taken together, over several years, they have amounted to an astonishingly successful centre-right revolution. Photograph: Ben Nelms/Reuters

According to the website of our new, as yet unnamed, political party, its first founding principle is “the building of an economy that supports entrepreneurs, employees and consumers of small businesses”. I assume that placing this aspiration in pole position hints at its importance to the new grouping, but what does it mean? On the day of the party’s not-quite-a-launch, we were told, repeatedly, that the intention is to be “business friendly”.

It might be assumed that to place a “business-friendly” policy stance at the front of your manifesto is an attempt to position yourself as being somewhat different to the competition. “Reboot Ireland” must think that significant chunks of the Irish political spectrum are not business friendly, perhaps even business-hostile.

Superficially, at least, it is easy to understand why: the medieval tax-and-spend policies of Sinn Féin and other self-described left-wing parties usually have an anti-business whiff about them.

However it is likely that the main parties jostling for the centre ground would react angrily to being lumped into an anti-business faction. All of them, for instance, have pledged to retain our low corporation tax regime; there is little that is friendlier than a low tax rate.

What exactly are business-friendly (or otherwise) policies? Again, taxation is probably something most people would say forms at least part of the answer. And not just tax rates – there are numerous tax breaks, credits, reliefs and allowances available to any finance minister. There are also subsidies, a favourite of politicians of all persuasions all over the world.

There is nothing a US senator or European commissioner likes more than an old-fashioned subsidy. In a strange alliance, US Republicans and French Socialists both love handing cash to farmers of all descriptions. Whether such behaviour is truly business-friendly is extremely doubtful.

Theory and practice tells us that political meddling with taxes and subsidies invariably leads to poor outcomes. By contrast, the most business-friendly policy is simply for government to get out of the way.

So we must also consider the role played by regulation. Of course, in our post-financial crisis era, the role played by an absent regulator in the failure of the banking system is well established and has led to an inevitable backlash, one that calls for more regulation, appropriately, of the financial system. In the time-honoured strategy of throwing the baby out with the bath water, we pay no attention to anyone who moans about the excessive burden of regulation in any sector, not just banks. Which is a pity.

One thing that unites our unnamed party with all others, especially those on the other end of the political spectrum, is a promise to be radical. This undertaking to deliver lots and lots of change flies in the face of everything we know about human behaviour and, in particular, what we know electorates actually want.

While it is true that many people always say they desire change, actions nearly always reveal completely the opposite. Historically, people only vote for radical change in the immediate aftermath of crisis and/or war; most of the rest of the time they prefer things to stay roughly the same. Our extremist politicians gaze fondly in the rear-view mirror as the financial crisis gradually recedes into the background.

There is an interesting contemporary model of how to be radical – slowly – and implement business-friendly reforms in a country that has traditionally been very centrist, all the while increasing electoral support for conservative policies.

Nobody on this side of the Atlantic has noticed, but Stephen Harper, now one of Canada’s longest-serving prime ministers, has achieved just that. Few of his incremental reforms can be described as radical but taken together, over several years, they have amounted to an astonishingly successful centre-right revolution, albeit probably the quietist in history. “Harperism” has much that should interest Lucinda Creighton and Eddie Hobbs.

Recent Irish emigrants to Canada may not have heard about Harperism, but they know all about its economic consequences.