Irish workers may be only half as productive as OECD suggests 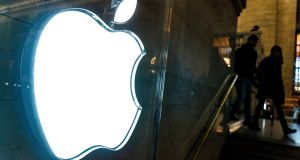 Workers in the domestic sector, which excludes multinationals such as Apple, added an average €47.87 to the value of the economy for every hour they worked in 2017, which was less than the OECD average. Photograph: EPA

Irish workers may be only half as productive as OECD data published earlier this week suggests, according to figures from the Central Statistics Office (CSO).

The OECD figures, published on Tuesday, suggested Irish workers are the most productive on the planet, adding an average of $99.50 (€87) to the value of the Irish economy for every hour they worked in 2017.

This put them ahead in workers in competitor countries such as the United Kingdom, France and Germany. The Republic’s rate was also nearly twice the OECD average.

However, the CSO has released details of a forthcoming study, showing workers in the domestic sector here, which excludes multinationals, added an average $54.20 (€47.87) to the value of the economy for every hour they worked in 2017. This was less than the OECD average.

When multinational employees are included, the hourly rate here jumped to $87.33 (€77), which was more in keeping with the OECD’s original finding.

Goodbody economist Dermot O’Leary said the figures tell a tale of two economies in Ireland, “hyper-productive foreign multinationals, while the indigenous sectors have lagged significantly behind”.

“The problem here is that the performance of the multinationals hides some underlying problems,” he said.

“It may be the case that Ireland is contracting a case of ‘Dutch disease’ whereby a booming sector bids up prices and wages resulting in lost competitiveness overall,” Mr O’Leary said. “The focus from a policy point of view is to try close the productivity gap between the foreign and domestic firms,” he said.

Labour productivity typically measures the value of work done in a given economy over time, with higher value-added jobs generating the greatest productivity gains. It is the main driver of wages and living standards.

The OECD’s estimate of labour productivity here is calculated by dividing national income, in this case gross domestic product (GDP), by the number of hours worked annually.

The high concentration of multinationals here and their complex financial arrangements tends to warp Irish GDP, which is no longer considered reflective of domestic economic activity. This may explain the Republic’s high OECD ranking.

Technology and innovation typically underpin productivity growth in most countries and multinationals tend to lead the way in these areas, creating the biggest value-added jobs, which, in turn, generate the greatest productivity gains.