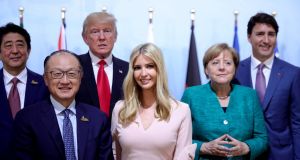 The World Bank lifted its forecast for global growth, predicting the global recovery will continue to gain steam after reaching the fastest clip in six years.

The development lender raised its estimate for global economic growth for this year to 3.1 per cent, up 0.2 percentage point from an estimate in June, it said Tuesday in its latest Global Economic Prospects report.

The world economy probably expanded 3 per cent last year, which would be the fastest pace since 2011.

Global growth is expected to last for at least the next couple of years, as conditions improve for commodity exporters hurt by the oil crash, said the Washington-based lender.

Still, the bank said risks remain tilted to the downside, warning an abrupt tightening of financing conditions or spike in market volatility could derail the expansion. The pain would be greatest for emerging markets and developing economies with big external financing needs and weak corporate balance sheets.

“The big picture is a good one,” Ayhan Kose, director of the World Bank’s Development Prospects Group, said in a phone interview. He cautioned that “we need to get ready for the next episode, because history repeats itself.”

While policy makers fretted last year about the impact of US president Donald Trump’s “America First” policies, investors have been betting the global recovery will continue.

The SandP 500 Index has climbed in the first six trading days of 2018, hitting a record as investors continue to price in the impact of US tax cuts.

The World Bank projects the US will grow 2.5 per cent this year, up 0.3 percentage point from its June forecast. Kose said the bank expects the Republican tax cuts passed last month will boost US growth by 0.6 percentage point over the next three years.

China will expand at a 6.4 per cent pace this year, up 0.1 point from the June projection, the World Bank said.

While Chinese policy makers have continued to rebalance the economy away from state-led investment, corporate credit continues to climb as a proportion of output, according to the lender.

The World Bank projects the negative global output gap will close for the first time since 2008, meaning actual output is expected to approach potential.

While that should allow central banks to continue or start raising interest rates after a decade of easing, emerging markets should guard against spillovers, the lender warned.

Potential growth has been plodding along below its long-term average, weighed down by weak rates of capital accumulation and slow productivity growth, the bank said.