Irish economy grew by 0.6% in the second quarter 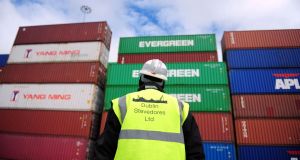 The latest quarterly national accounts, published this morning by the Central Statistics Office, put the economy back on a more normal growth trajectory following recent revisions

Ireland’s economy grew by 0.6 per cent in the second quarter of 2016, rebounding from a 2.1 per cent contraction in the first three months of the year.

Compared with the same period 12 months ago, gross domestic product (GDP) grew by 4.1 per cent, while gross national product (GNP), which strips out the effect of multinational companies, advanced by 4.6 per cent.

The latest quarterly national accounts, published on Wednesday by the Central Statistics Office, put the economy back on a more normal growth trajectory following recent revisions that suggested the economy grew by 26 per cent last year.

Confidence in the Irish statistics had been undermined by those revisions, with US economist Paul Krugman coining the phrase “leprechaun economics”.

The focus on Ireland has also been reinforced by the controversy over Apple’s tax arrangements here. The company’s transfer of intellectual property assets to Ireland is most likely the main driving force behind the revision in GDP.

While the latest CSO data reflects the continued strength of the economy, the figures still exhibited a high degree of volatility, reflecting last year’s “step shift” in growth.

What is leprechaun economics?

The term was coined by US economist Paul Krugman in July 2016 following the publication of growth figures by the Central Statistics Office. It had revised Ireland's growth up to 26% for 2015, prompting Krugman to tweet: "Leprechaun economics: Ireland reports 26 per cent growth! But it doesn't make sense. Why are these in GDP?”

The figures appeared to have been affected by a one-off factors including activity in the aircraft leasing sector and restructuring by multinationals involving the movement of patents.

Personal consumption, the largest component of domestic demand, fell by 0.5 per cent in the second quarter after growing by 0.7 per cent in the three months previous, less than originally estimated.

Investment,meanwhile, jumped by 38.9 per cent, reflecting increased imports of IP products, which equated to €9 billion in real money terms during the quarter.

As a result, overall domestic demand rose by 9.1 per cent but net exports, a traditional driver of Irish economic growth, contracted by 31.4 per cent. The other component of domestic demand, government expenditure, increased by 5.2 per cent during the quarter.

Ireland’s balance of payments current account – a measure of the State’s financial flows with the rest of the world – recorded a surplus of €4.6 billion, a decrease on the €7.5 billion recorded this time last year, again reflecting increased imports of IP products.

Even before last year’s revisions, Irish economic growth has outpaced the rest of Europe for the past two years and will do so again this year if the Government meets its forecast for an expansion of 4.9 per cent.

Commenting on the need to develop a broader suite of domestically focused indicators, the CSO’s assistant director general Jennifer Banim said: “The small, open and highly globalised nature of the Irish economy makes it increasingly difficult to represent the complexities of economic activity in Ireland in single headline indicators such as GDP or GNP.”

She said the CSO was convening an expert group to develop recommendations on how best to meet these statistical needs.

The 13-person group, which is due to meet in the coming weeks, will be chaired by Central Bank governor Philip Lane.

“After the extraordinary step shift of 2015, it looks like the economy is reverting to what is still very strong growth by international standards,” said KBC chief economist Austin Hughes. “But it may be a little more moderate than previously envisaged. It looks like we might see growth of around 4 per cent for the year,” he said.