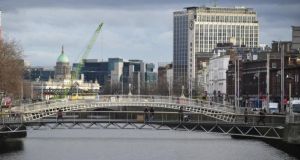 GDP grew 1.4 per cent in the first quarter of 2015 compared with the final quarter of 2014. But GNP, which strips out the impact of multinational profit flows, declined 0.8 per cent quarter-on-quarter

Ireland’s economy grew by more than 6 per cent in the first three months of the year compared with the same period in 2014, new figures reveal.

Data released this morning in Dublin by the Central Statistics Office shows that gross domestic product (GDP) in the first quarter of 2015 accelerated by 6.5 per cent year-on-year while gross national product (GNP) advanced by 7.3 per cent.

The new quarterly national accounts figures, keenly anticipated by analysts, had been delayed for a month due to the incorporation of 15 years of aircraft leasing data.

This prompted big revisions to balance of payment data and other figures but such changes were not expected to change the underlying level of GDP, as adjustments to international investments would quash the impact of increased imports.

“The effect in the national accounts on GDP and GNP is relatively minor,” said Jennifer Banim assistant director general at the CSO.

Amid anticipation of a further advance in growth this year, the latest figures provide fresh insight into the actual performance of the economy in 2015.

The GDP figures, which form the basis for key budgetary calculations, show that the pace of quarter-on-quarter economic growth on a GDP basis picked up in the opening months of the year.

GDP grew 1.4 per cent in the first quarter of 2015 compared with the final quarter of 2014. But GNP, which strips out the impact of multinational profit flows, declined 0.8 per cent quarter-on-quarter.

Data released in March showed that seasonally adjusted constant price GDP rose 0.2 per cent in the fourth quarter of 2014 compared with the prior quarter of 2014. GNP increased by 2.3 per cent over the same period.

In March the CSO said the economy grew by 4.8 per cent in 2014 on a GDP basis. However this figure has now been revised upwards to 5.2 per cent.

The CSO also revised its figure for GNP growth last year to 6.9 per cent from 5.2 per cent.

Such revisions reflect the invitation of new tax and commodity flow data for 2013 and insurance statistics for 2013.

The latest Government forecast suggests the economy will expand this year by 4 per cent. In a new assessment yesterday, the Central Bank upgraded its 2015 growth projection by 0.3 percentage points to 4.1 per cent.