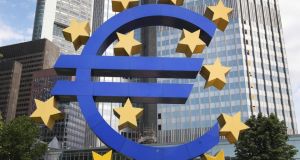 Irish bond yields have so far avoided the contagion engulfing Southern Europe stemming from the latest developments in Greece.

However, the yield on 10-year Irish notes, effectively the rate at which the Government borrows, remained largely unchanged at 1.6 per cent.

This prompted some commentators to suggest that Irish bond yields are now decoupling from the traditional peripheral bedfellows, Portugal, Spain and Italy, and are more in line with semi-core yields, like those of Belgium .

“What’s been happening in the euro zone is that it’s a risk-off day today. A lot of the core countries like Germany, Finland have seen pretty significant drops in their bond yields, while at the other extreme peripheral countries like Spain, Italy and Portugal have seen increases in the order of mid-teens to low 20s basis points,” Philip O’Sullivan, chief economist at Investec told The Irish Times.

“What we’re seeing is that Ireland has effectively decoupled from the rest of the peripheral countries and this is being reflected in its outperformance compared to the other so-called PIIGs.

“Ireland is in splendid isolation because it is the only one of the PIIGS where the 10-year-yield is down. It’s down very modestly at 1.61 per cent at 1.9 basis points but it shows we are standing out. The reason for this is that Ireland has been transitioning towards semi-core status. We’re effectively now in-between and that’s as a result of our economic profile, which has been very strong with the highest growth in Europe last year. We’re also expected to record the highest growth in 2015 and 2016 and we’re seeing a lot of technical support in terms of rating agency upgrades and so on,” he added.

Mr O’Sullivan said that while he did not expect a so-called “Grexit” in the coming days any further moves towards one would likely have repercussions for Ireland.

“If the risks of a Grexit were to intensify I think it would put non-core yields under pressure and unfortunately while the likes of Spain and Portugal are more vulnerable than us, I don’t think we would be immune if there was a wider market sell-off,” he said.

“We have the fastest growing economy in Europe, our budgetary position has improved dramatically, exchequer returns are expected to be strong again on Thursday.”

“Even with the expected €350 billion hit posed by Grexit, we’re still pretty comfortable, we’re funded for this year, and have most of the funding for next year. There’s no immediate worry. The current account is now in surplus.”

“I think the markets are looking at Ireland and saying they’ve made huge inroads...and we’ve clearly benefitted from our close ties to the UK and the US, two of the strongest performing economies.”

“The other thing for Ireland, because we’re such an open economy, the perceived weakness in the euro will benefit us more than other peripheral countries.”