Exasperation in OECD at snail’s pace of reform 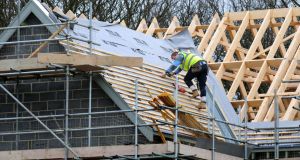 Astonishingly, the apprenticeship system – even now – is still geared towards the building industry, despite the OECD making clear recommendations for this insanity to stop in its last report, two years ago.

If it didn’t exist, would it be created? That is the most basic test of any public institution (try it on the Seanad). The same test should be applied regularly and rigorously to the myriad schemes, programmes and policies on which governments spend taxpayers’ money.

Yesterday’s biennial report from the OECD on Ireland masterfully highlighted the failings of the administration to apply that test in two of the most important things it tries to do – boosting employment and increasing entrepreneurship.

Given the State is crying out for more of both, and that it needs to use every cent it spends to maximise the stimulus effect, one might think the Government would be working tirelessly to ensure every tax euro is making the greatest possible contribution to hastening recovery.

Alas, it is not. Instead, Government is still wasting taxpayers’ money on failed schemes when, as the OECD says, it should be shutting them down and diverting the money to those which deliver more bang for their buck.

This is all the more disappointing because, during the election campaign, Enda Kenny, who does not habitually go about dropping the names of the giants of the Italian renaissance, quoted Galileo. “Measure what is measurable, and make measurable what is not,” he said. The remark was as insightful as it was unexpected.

One of the great failings of Irish governance has long been the failure to measure the effectiveness of policies. Mangers need data on inputs and outputs and they need information systems. Without this, decision makers cannot quantify, and thus fly blind. Fly blind for any length of time and the outcome will be bad.

Continued failure
Yesterday’s report highlights the continued failure to measure. It calls for evaluation of the Momentum programme on vocational education; JobPlus, which seeks to encourage firms to hire those in long-term unemployment; Springboard, which gives part-time third level courses to the jobless; and “all” innovation and entrepreneurship programmes.

Richard Bruton at the Department of Enterprise, Jobs and Innovation, gets plenty of flak for his inaction in subjecting his sprawling empire to greater rigour.

During the create-a-quango Ahern years, new programmes and agencies were set up to beat the band. The result, the OECD points out, is “over 170 separate budget lines” in the innovation space “sometimes for very small amounts of money, and 11 major funding agencies”.

It goes on: “Fragmentation raises overheads, risks duplication and hampers resource reallocation. Gains would be achieved by consolidating funding into a drastically smaller number of agencies” (my emphasis).

Halfway through the coalition’s time in office, Bruton is still dithering. As with their technocratic counterparts in the troika, there is evidence of exasperation in the OECD people’s report.

Astonishingly, the apprenticeship system is still geared towards the building industry, despite the OECD making clear recommendations for this insanity to stop in its last report. Yesterday they repeated those recommendations with the preface “as already recommended two years ago in the previous report” .

On the snail’s-pace deployment of social welfare case officers to help the jobless find work, the report says that, despite consideration being given to involving the private sector at the beginning of last year, “no final decision has yet been taken, and it will take at least an additional year to set up the actual service provision”.

Separately, it notes dryly that the establishment of Solas, the agency designed to replace the training agency Fás, “was announced in mid-2011 but had not begun operating two years later”.

After two and a half years in office, Enda Kenny can claim a fair number of achievements. But despite a massive mandate and the political cover of the troika , he is not overseeing the rebirth of Ireland’s governance structures.

1 Retailers accused of ‘stealing business’ from rivals by flouting restrictions
2 How long can Government afford to keep State pension age at 66?
3 Nama grants Ronan four-month extension on €160m glass bottle site deal
4 In praise of Gogglebox Ireland, an essential service in all but name
5 Irish whiskey sales near milestone of 12m cases a year
6 Goldman Sachs in talks to take over Blanchardstown shopping centre
7 Outgoing Irish a sitting duck for Covid
8 How to improve ethics at your company
9 Wake-up Call: Why unethical high performers are not shunned by peers
10 Dealing with the financial fall-out of divorce among over-60s
Real news has value SUBSCRIBE