Ireland is not a tax haven, Leo Varadkar says

Taoiseach tells Thanksgiving gathering that corporation tax rate will not change, takes issue with US rumblings over trade deficit with Republic 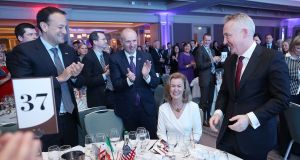 And he took issue with rumblings from the US over its trade deficit with the Republic.

“When you look at the facts, free trade goes both ways,” he said. “And free trade and free markets make all countries better off.”

Addressing growing concerns among multinationals about Ireland’s housing crisis, the Taoiseach said the Government recognised that it is “becoming a constraint in attracting and retaining talent, particularly in Dublin”. It was working to address the issue. That would take time, he said, “but we are making real progress”.

Ms Anderson’s US posting completed 45 years at the Department of Foreign Affairs and saw her complete a series of firsts, which also included being the first woman permanent representative from a member state to the European Union and Ireland’s first female Ambassador to France and the United Nations.

Accepting the award, she spoke about a career that saw her enter the Department just as Ireland was joining the European Economic Community in 1972.

“We see isolationist trends taking hold and we have heard the drumbeat of sovereignty movements,” Ms Anderson said, reflecting comments from outgoing chamber president James O’Connor about the threat of protectionism to the business of member companies.

The former ambassador said a “widening Atlantic is not something we should resign ourselves to” adding that no country was better equipped that Ireland to interpret Europe to America and America to Europe.

“May Ireland and America always remain true to their better selves,” she concluded.