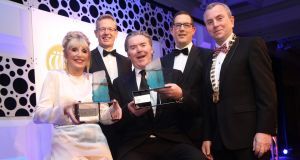 Voxpro founders Linda and Dan Kiely, who were recognised by Cork Chamber with the Outstanding Achievement in Business award, having taken their company from just six employees 20 years ago to the recent sale for $150 million to Telus International. The award was presented at the Cork Chamber Dublin dinner last night in the Clayton Hotel, Burlington Rd in front of 600 guests. Pictured with the Kielys are (from left) John Higgins, partner of sponsors EY; Conor Healy, chief executive of Cork Chamber; and Bill O’Connell, president of Cork Chamber. Photograph: Finbarr O’Rourke

Government growth plans for cities outside Dublin will perpetuate the current imbalance that favours the capital over the rest of the Republic, according to Cork Chamber president, Bill O’Connell.

Addressing the chamber’s annual Dublin dinner, Mr O’Connell stressed that the Government needs to recognise Cork as the driver of a thriving southern region in the National Planning Framework and investment plan.

He argued that the planning framework, Ireland 2040, acknowledged that it was in the national interest to promote growth outside Dublin to alleviate pressure in the capital and create opportunities elsewhere.

“Against this objective, Cork Chamber does not consider the draft growth targets for cities other than Dublin to be ambitious enough,” he told the gathering of 600 business people and politicians in the Clayton Hotel, Burlington Road.

“With the current proposed figures, existing economic imbalance across Ireland will perpetuate, which has a real risk of threatening the attractiveness of our country for future investment and jobs growth.”

He pointed out that Cork has been identified as having the greatest potential for growth relative to its size of any other part of the Republic.

He said that its development could showcase collaboration between Government and Industry and make the Republic and Cork the most “attractive location to live, set up and invest”.

The chamber presented its Outstanding Achievement in Business award to Dan and Linda Kiely, who recently sold their outsourcing business Voxpro to Canadian group, Telus, for $150 million (€128 million).

10 Glenveagh to charge council up to €791,500 for family apartments